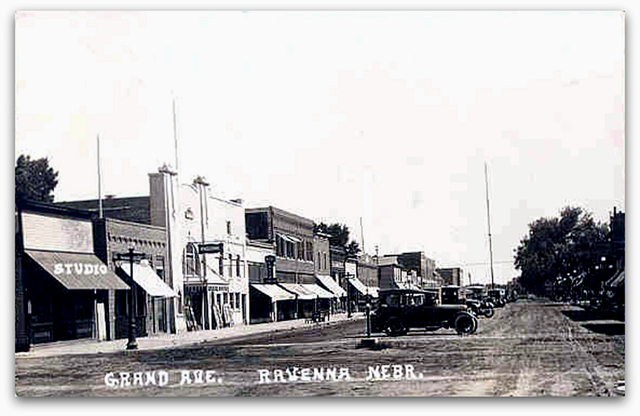 Designed in Mission Revival style, the facade was done in a material called kellastoned stucco which imitated adobe. An artist was hired from Omaha to decorate the auditorium and lobby walls with frescoes. The Pastime Theater was air-conditioned as well, a luxurious touch for the time. Its stage had a depth of sixteen feet to accomodate stage productions in addition to the silent films onscreen.

Talkies arrived at the theater in 1929, and in 1933, its new owner, Eddie Forester inaugurated something called show dances on Sunday nights at the Pastime Theater.

In the 1940s, a new owner gave the Pastime Theater a new name, the Grand Theater, and a new, updated look, which included an Art Deco style marquee. The Grand Theater continued to be a popular attraction until attendence fell off starting in the 1970’s, and was closed in 1980.

It reopened, however, three years later under Ron and Cheryl Voigt, who did a little renovation on the Grand Theater and showed first-run films on Saturday, Sunday and Monday nights. In 1990, the Grand Theater again closed, and was used first as an auction house, then for storage before being abandoned entirely and left to fall into disrepair.

In the mid-1990’s, the roof collasped, destroying the auditorium. The lobby, balcony, restrooms, and nursery are still largely intact, as is the facade (except for the Art Deco style marquee which was removed shortly after the Grand Theater closed in 1990).

Plans are now in the works to clear the ruins of the auditorium and create an outdoor courtyard, while converting the lobby and balcony into a community center and a place to display relics of the Grand’s past. Supporters would also like to return the facade to its 1919 appearance. It is hoped that the Grand Theater can once more become a focal point of Ravenna.

From Ravenna a photo postcard image of the Grand Theater.