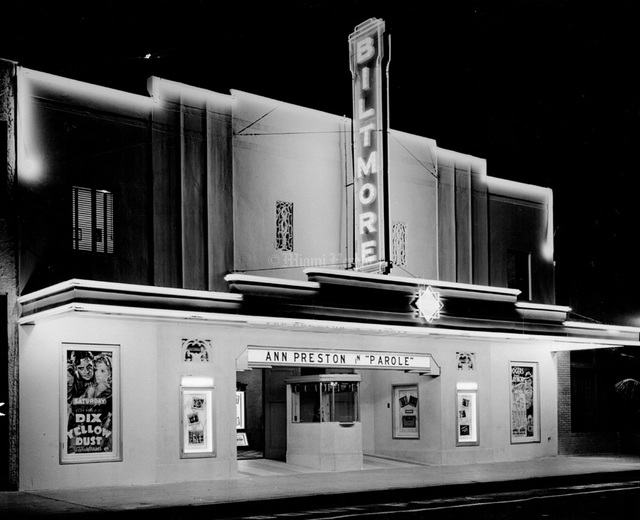 This was a moderate-sized neighborhood theatre which opened on October 3, 1921 with Jack Pickford in “Just Out of College”. By 1932 it was operated by Wometco Theatres. It was closed in 1954.

Got to thinking about the location of the Biltmore which is listed above at 151 NE 40th St. I vaguely remember going there once or twice but couldn’t come up with an image. A look around the street on Google Earth didn’t help. The buildings at that address don’t really reveal much about their earlier form or appearance, which is right in the middle of what has become the Design Center area. Miamiguy’s telephone book listing posted on the Town Theater page lists the address as 151. But I recently uncovered my sister’s membership card in the Mickey Mouse Club at the Biltmore Theater at 143 N.E. 40th Street. My sister was born in 1925 and must have been in the Mickey Mouse Clubwhen she was 10 or so, dating the card to about 1935 . Don’t know if this is important, but wanted to share the info.

The Biltmore was my neighborhood theater when I was growing up in the ‘40’s. It was located in the middle of the block, on the north side of NE 40th Street between NE 1st and NE2nd Aves. On the corner of NE 1st Ave. was a club for Spanish-American War veterans, which later became a branch Post Office.
Being a neighborhood theater, the Biltmore did not show 1st run movies. In those days, first-run movies were only shown in downtown theaters and on Miami Beach during the hotel(Winter) season. Back then, all of Miami Beach closed for the summer, right after Passover/Easter.

Ironically, though there is no longer a movie theater in the neighborhood, I was there to attend a screening of some of avante-garde filmmaker Jonas Mekas' work at an event space rented out for the evening by Obsolete Media Miami, an organization based in a nearby building that is a repository of archival motion picture materials and other related things.

Before going I checked Cinema Treasures and found this page for the Biltmore. In my opinion the building currently numbered as 150 NE 40th Street looks like it could have been a movie theater, with its tall rectangle rising above what could have been the entrance, since I have seen other movie theaters with similar features. The place is on the south side of the street however, while steg’s comment remembers the Biltmore as being on the north side.

Check out this webpage describing Fendi, the current occupant of the space:

There’s a photo of the exterior. The green square is the part of the building that makes it look like a movie theater to me. There are also some interior shots: high ceiling?; a staircase that could have led to a balcony or projection booth?

Does looking at these photos jog anyone’s memory?

During my walk I could not find a storefront currently numbered 143, and the building directly across from 150 that looks to be 151 when I zoom in on Google Street View has recently been removed.

Down the street on the corner of NE 40th Street and NE 2nd Avenue (4000 NE 2nd Avenue) is a small, historic, interesting, federal-looking building. It housed the designer clothing store Billionaire when I was there, but carved into the architecture above the door were the words “Buena Vista Post Office” with an eagle on top of that and a profile of a Founding Father underneath.

The property at 150 NE 40th Street which is currently occupied by Fendi that I mention in my previous comment doesn’t look like the photo of the Biltmore that has since been uploaded. Oh well.

The Biltmore theatre opened on October 3rd, 1921, not the 4th as I posted 10 years ago. Better quality grand opening ad posted and old one removed from the photo section.