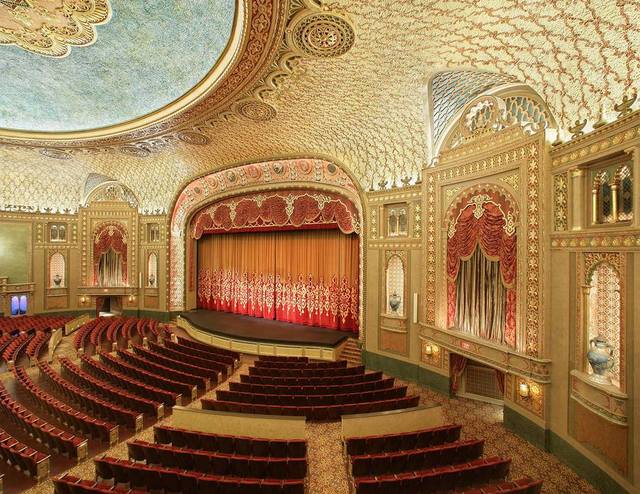 Opened September 30, 1928 with Clara Bow in “The Fleet’s In” accompanied by Jean Wilson at the mighty Wurlitzer, plus a stage show “Joy Bells”. The Tennessee Theatre was designed by Chicago-based architects Graven & Mayger, who designed the nearly 2,000-seat theatre for the Publix chain in a spectacular Moorish-Spanish style. It was the grandest theatre ever built in Knoxville. The Tennessee Theatre featured terrazzo marble from Italy, Czech crystal chandeliers, handwoven carpeting and draperies, and museum quality artwork displayed all over the theatre.

The lobby was designed to resemble a Moorish palace, with inlaid tiles on the walls and gold gilt on the marble capitals. The auditorium itself with its vast stage and Wurlitzer organ, velvet seats, and frescoed ceilings, was designed to resemble a royal palace of Granada. The Tennessee Theatre became one of the earliest Knoxville palaces to be air-conditioned, and became a haven for people walking down Gay Street in the summer heat.

In 1949, Paramount acquired the Tennessee Theatre and in 1953, began to show CinemaScope films like “The Robe” on its 54' screen.

In the mid-1960’s, ABC/Southeastern took over the aging palace, and in 1966 it was refurbished, though the original decor of the theatre was retained. The seating capacity was dropped from 1,996 to a little more than 1,500. After nearly half a century, the Tennessee Theatre finally closed in 1977, but reopened the following year screening classic films. It closed again in 1979.

In 1980, the theatre was reopened and refurbished in time for the World’s Fair in 1982, the same year it was placed on the National Register of Historic Places. The Tennessee Theatre was declared the official theatre of the State of Tennessee in 1999.

The Tennessee Theatre is today used for classic movie screenings, stage shows, concerts, and has been home to several arts groups since the 1970’s, including the Knoxville Symphony Orchestra, the Knoxville Opera Company and the Appalachian Ballet.

Special thanks for Becky Hancock, general manager of the Tennesse Theatre, for her valuable information!

thanks Guys. i have one of the booth,somewhere!

Tim
In the photo “Auditorium 1929” what’s with the trellis-like railing at the orchestra pit? Never noticed that before.

Will,
The lattice showed up in the second round of photos that Jim Thompson shot in 1929
Don Pedro and his band only lasted until spring of 1929. Paramount discovered that the public accepted the shorts with sound instead of live acts. So there was no need to pay for a live band. My guess is they put up the lattice fence to hide the empty orchestra pit.

Here it is from the front.
View link

This restored theatre is a must-see when in Knoxville! Hope to revisit this winter!

An obscure 1934 artist depiction added featuring each of the downtown Knoxville movie theatres! Image and copy courtesy of the Tennessee Archive of Moving Image and Sound Facebook page.

Functions should include: Movies (classic)

Inside of Knoxville link with photos of the June 2016 removal and August 2016 replacement of the Tennessee blade sign.