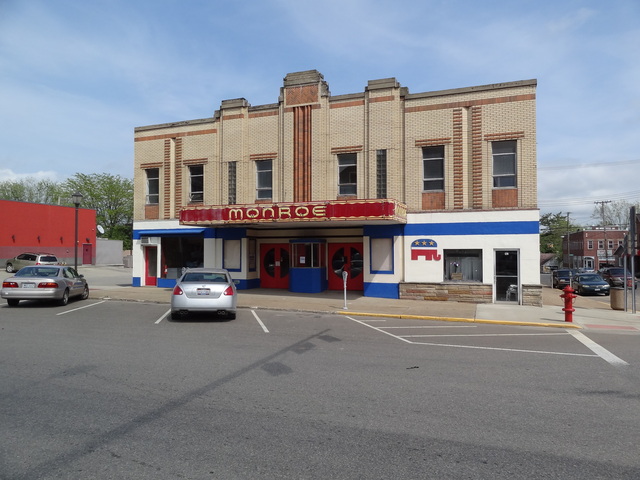 The Monroe was probably the theater mentioned in the August 26, 1939, issue of Boxoffice Magazine, in an item that said that Chris Velas of the Pleasant Valley Theatre Company had a 650-seat theater under construction in Woodsfield (another issue of Boxoffice, after the house had opened, gives the seating capacity as 500.) The item also said that Jesse Shannon was opening his Life Theatre at Woodsfield that week.

Then the June 29, 1940, issue of Boxoffice said that the Monroe Theatre had been ordered to suspend operations until building requirements were met. No details were given about what requirements the theater had failed to meet, but the item said that the house had been completed within the last six months and had been in operation only a short while.

Several later issues of Boxoffice have items about the Monroe, usually mentioning the operators, a Mr. and Mrs. Glenn Fliehman. I’ve found no mentions of the Monroe later than May 14, 1962, when an article quoted excerpts from a letter written by Mrs. Fliehman excoriating the Academy Awards show.

Here is another photo. Hopefully the Republicans have moved on.
http://tinyurl.com/ykj9gxq

The Monroe Theatre has an active Facebook page, and posts items about the ongoing efforts to renovate the house and reopen it as a performing arts theater. This post from March 8 reproduces an article from the Monroe County Beacon noting a $20,000 grant to the Monroe Theatre Committee from the local Baker Foundation. The grant will be used to fund a feasibility study.

Another post reveals that the Monroe Theatre opened on December 2, 1939.

The Monroe Theatre’s Facebook page continues to be active, with a post from March 12 outlining the progress that has been made in preparing plans for the eventual renovation of the house by project architect Lauren Burge. One passage in the article cites Ms. Burge’s observation that “…the Monroe Theatre’s most unique feature from an architectural standpoint is the lack of corners anywhere in the interior of the original building; this is characteristic of the streamlined architecture of the 1930s.” The page also has links to three videos about the theater.