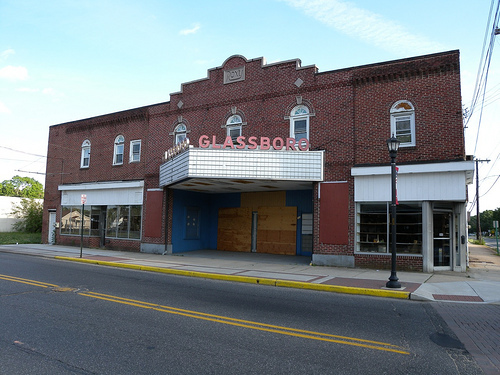 Opened as the Roxy Theatre in 1928. Designed for vaudeville and motion pictures. Had a Page organ. Closed as the Glassboro Theatre in the 1970’s. Building was still standing unused until it was demolished in November 2013.

Any additional information on this theatre would be greatly appreciated.

Looks like the Borough of Glassboro purchased this property on 4/20/2007 for $420k. Actual address is 100-108 E. High Street. This theater has been shuttered for years with the front entrance (sort of) boarded up and no signs of any real activity. The building appears solid and secure, but there is no telling what it looks like inside. There is an interesting remark on the record of a previous sale (on 11/7/2003 for $270k) that states “Usable”, which sends the imagination reeling with the possibilities. If anyone is interested in an up-to-the-moment picture of this property, please let me know (I drive past it all the time.)

With the proximity of this theater to Rowan University, I am shocked that someone has not stepped up and make this work as a movie house. New/old/live/whatever. I saw a boxing match there a decade ago, and it looked OK then.

Here is a marquee photo:
http://tinyurl.com/ydsepqu

Does anyone have a nice picture of this theater when it was open for business? My father used to run this business and the Pitman theater for Duffy. Duffy was like a father to him. My dad started working for Duffy when he was 12 yrs old or so. I would like to give him a nice picture of this theater or even a nice photo of Duffy. My dad hadn’t seen Duffy for many years because of him moving away and was not able to see him before he died. I have searched the internet for photos of this theater when it looked nice or photos of Duffy and have come up empty handed. Please help!!!

This building is in serious disrepair, the roof has recently collapsed over the auditorium portion which can actually be seen in Ariel photographs. Someone has stolen all of the air conditioning components (For copper) on the side of the building (near the office complexes on the post office side)-which are now also vacant. The last remaining store “Naydene’s Accessories” was relocated in 2007. There are no longer tenants in the second floor apartments, and due to constant vandalism the front 1970’s doors had to be boarded over (so you cannot even peek inside anymore). Sadly, I have heard rumors that this plot is being slotted for modern development proposed by Rowan’s Universities downtown revitalization program.

Now for some less sad memories: – I remember up until 2006 it was used as a Christian church meeting hall and would be regularly open to the public, I used to be able to see into the lobby as I road my bike to work (nothing spectacular- just fluorescent lights and blue walls). -I also saw in a Glassboro historical record that the shop on the right side was the “Glassboro Electric Company” which is were, I guess you would go to pay your bill. -The property was for sale in 2000 for approx $145,000 and was purchased- used briefly. -It also hosted boxing matches in the late 1980’s- early 1990’s

I wonder if the carbon- arc projector is still in the building? With its antique electrical components.

im looking for locations for a youth non profit organization to base out of im interested in purchasing the theater, anyone know how i would go about that?

This theater has sadly met its end…It was demolished on November 5, 2013. I added a picture of it being torn down

I just can’t believe that, as close as they are to Rowan, it could not be turned into a viable theater is beyond me. A sad day.

Well, sad news for this one. Drove past a few nights ago and this classic theater was turned into a fenced-off pile of rubble. Great job, Glassboro!

Status should be changed to DEMOLISHED.