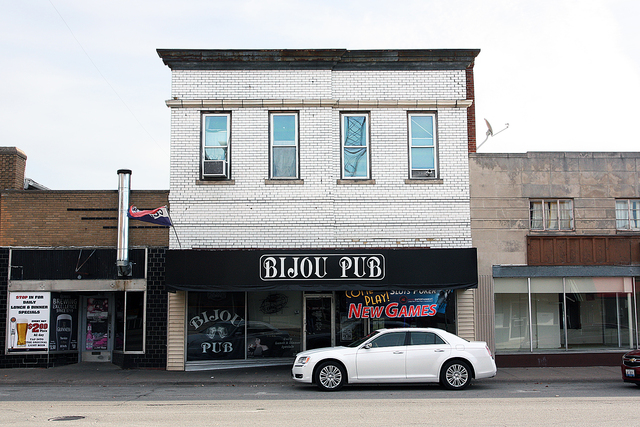 The Bijou Theatre, the second theatre to be named Bijou in the city, was opened July 29, 1912. It was closed in 1952 and went over to retail use. By 2019 it is home to the Bijou Pub, which features live music. The Bijou Theatre is located next door to the much larger Rivoli Theatre.

I am the current operator of the Bijou Pub. I would love to have any old pictures of the building when it was a theater!

George Howard had two Bijou theaters, the first on the west side of the 200 block on South Main St. which was earlier a roller skating rink, and there were theater owners before and after Mr. Howard had it.

He’d worked as a cigar maker at Fairfield, Iowa in 1910, and it seems that he had the winning ticket on the lottery which won him about $1,200. With that, he came to Monmouth early in 1911, intending to buy the Lyric theater, then in the Quinby building, later the Elks building east of the Monmouth public square. That deal didn’t go through, and he bought the Bijou Theater, which prospered and so he erected a new building with the theater within.

Should be listed as Closed.

When the Pattee Opera House began showing movies in the 1900s, there was a business opportunity to create movie houses. Monmouth’s first full time theatre was the Lyric in 1908 followed by the original Bijou Theatre launched by the Lytle Brothers in March of 1909. By December, the Bijou was bankrupt but came back under George A. Howard.

The 200-seat nickel theatre outgrew its space and Howard built an impressive new Bijou launching it on July 29, 1912 likely on a 20-year lease. The theatre was converted to sound and got a major refresh in 1932. In 1952, it ceased operations at the end of a second 20 year lease and is converted to a retail store called Beaty’s.