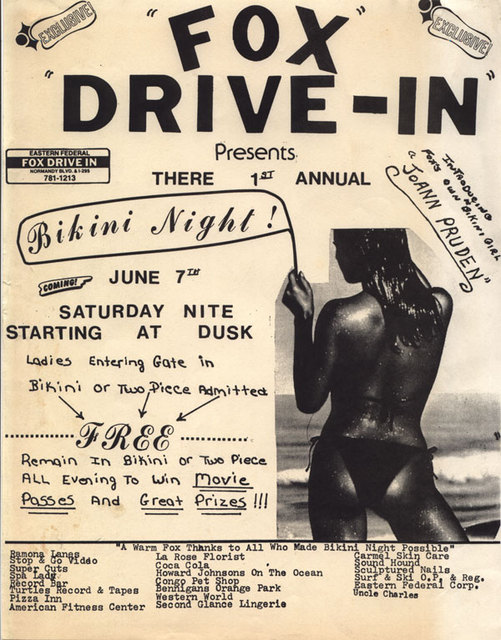 Drive-in theatre off Normandy Boulevard and I-295 in Jacksonville, Florida. Started life as one screen but twinned around 1976. It was operated by Eastern Federal Corporation.

Fox Drive In Marquee circa 1979

Picture taken from Drive-ins.com-a cool resource for the drive-in lover.

All I did there was keep the booth equipment up and running when I worked for eastern federal corp. back in the early 80’s and thats when the midway twin drive in by eastern federal was also still open before the walmart !&#*%^ land grabbers got a hold of it.Boy those were the days or well nights actually.

Address given as 7777 Normandy Blvd. Now a Publix Shopping Plaza.

Newspaper ads and times for films that played at the Fox & Midway
here.

Harvey, cool marquee picture and theatre ads. Until only the last couple of years, you could see the drive-in parking spots w/ poles from the back of the trailer park next to where the theatre was located. As a child I remember seeing “Walt Disney’s Snow White” there. In my teens, I saw “Rollercoaster” there on my first drive-in movie date with a girl.

To give credit where credit is due, a gentlemen named Tommy Holcombe contributed that picture to drive-ins.com. It’s the only picture of the Fox marquee I’ve been able to find.

The drive-in property itself is occupied by The Oaks At Normandy Apartments, a Publix is built on the propery which fronted between the drive-in and the Normandy Blvd.

When Eastern Federal twinned both the Fox and the Midway Drive-In, they installed AM Carrier Curent Sound and removed the speakers from all but the last few rows, you know the ones, the rows that the trunk slashers let their cargo out, and the rows with the rocking cars. They remained first run through the early 80’s. Then switched to the “B” movie, Zombie, Slasher soft core format. By 1984 they were Dollar Theatre running second run movies. They did out live the Midway Drive-In, which closed in mid 1984. The Fox closed not long into 1985, thus ending Eastern Federal’s Drive-In operations in Jacksonville, FL.