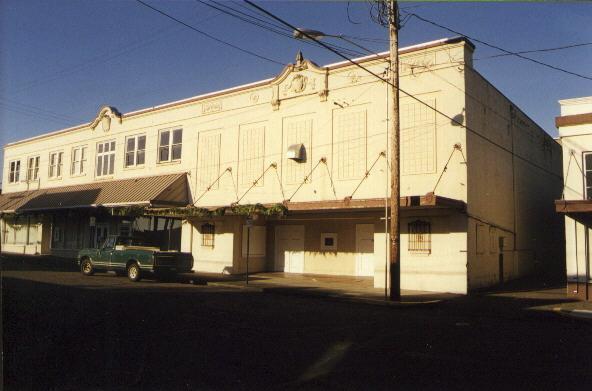 The 500-seat Armour Theater was opened in late-summer of 1926. The ticket booth was removed in 1965 when the building was sold to the Odd Fellows. The outline of the ticket booth can still be seen in the concrete. This theater is now used by a church.

Was this theater also known as Gwynn’s or Amour theater?

This theater is now used as a church by Calvary Chapel. Some remodelling has taken place.

This is from Boxoffice magazine in December 1951:

MONTESANO, WASH.-Peter J. Koppinger has sold the New Montesano Theatre to Mr. and Mrs. G.E. Cressler of Seaside, Ore. As part of the deal, the Cresslers have sold the Beacon hotel in Seaside to the Koppingers, who came to Montesano in February 1948, when they bought the Montesano from Irvin Westenkow.

The Jones Historic Photo collection has a picture of the theater, photo # 7013_1 dated October 1929.

You may have to click on accept terms before being able to view the picture. The picture can be zoomed in for a clear view of the theater.

Zoom in all the way on the photo KenLayton linked to, and it looks like there might be a ghost sign on the theater’s side wall. On the other hand, it might just be years of accumulated dirt. I can’t make out any actual letters, but either way, the building was already pretty old in 1929. From the architectural style of the facade, I’d guess that it was built no later than the early 1920s, and more likely sometime in the 1910s, and perhaps even earlier.

If the building dates from as early as 1908, it might be the 400-seat Opera House at Montesano which was included on a list of theaters published in the September 5 issue of The Billboard that year. I haven’t found a theater at Montesano listed in any editions of Julius Cahn’s Theatrical Guide, though.

Was in Montesano today and took a look at the building. The building is stunning and looks to be in great shape. Was able to take a peek through the front doors and from what I could see the auditorium seeks pretty much intact as well.

The building is indeed in pretty good condition. If you go down the side alley, the “stage door” is still there.

There is significant history behind this Armour Theatre Company building in Montesano,Washington. The photo Ken Layton refers to was most likely taken when my family sold the building on October 15th 1929 to M&E Theatres Inc. Just prior to that on July 26th 1929 GW Armour died as a result of injuries received during a car crash bringing the first “talkie” movie to the theater. At the time the Armour Theatre Company owned quite a number of Movie Theatres and dance halls and GW Armour made a bold move and purchased what is believed to be the first “talkie” movie shown in Washington state which he was reportedly speeding in his car to get to the theatre when he crashed and ultimately lost his life. After his death as a result of complications from the car wreck his wife Eva and son Glen sold the theatre to George D Stringley after which point I know little of it’s history.

I did however have the pleasure of taking a tour of it yesterday 8/11/17 and seeing what a remarkable job Calvery Chapel has done with renovating and remodeling the theatre for it’s needs with great respect for maintaining the architectural integrity and history of the building. – Tom armour

Here is an item from the May 22, 1926 issue of Motion Picture News which could be about the Montesano Theatre:

“W. P. Armour is well under way with his new 650-seat first-run house at Montesano, and expects to have it ready for opening the latter part of the coming summer season.”