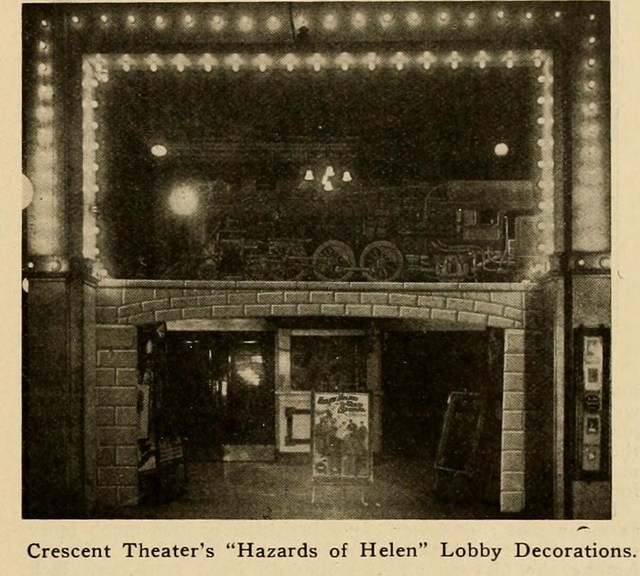 The Crescent Theatre was operating from around 1908 until 1925.

I was wondering because I found an item about the Elite Theatre on Fifth Avenue in the August 25, 1917, issue of The Moving Picture World. If it wasn’t the same house as the Strand then it isn’t listed at Cinema Treasures yet. Do you know what become of that Elite? The 1917 item is the only mention of it I’ve been able to find.

Hold everything- I told that wrong. I have confused the two Crescents. The Crescent at 233 opened at least by 1909, became the Elite during 1910 and was listed through 1916.

Incidentally when the property at 215- 217 was being remodeled in the 1980s I spoke to Jimmy Glascock who was involved in the project and he verified that a wall had been knocked out between the two addresses (the twin theater common wall). He also referred me to a local historian (whom I will not name lest I embarrass him) who argued that there had never been a theater at 215-217!

A 1918 notice says the Dixie Amusement Company owns both the Elite and the Strand. As late at 1920 the Strand and the Elite were running separate ads in the paper.

By the way, you do know how we pronounce “Elite” in Nashville, don’t you? It’s like Lafayette- just a local thing.

The 1917 item says that the Elite was then being operated by Crescent Amusement as a five-cent house, and was being renovated.

If the Fifth Avenue Elite was missing from the 1928 list, that means there were at least five Elite Theatres in Nashville over the years.

Actually, I’m not even sure how you pronounce “Lafayette” in Nashville. It gets pronounced more than one way in California. I rhyme the first two syllables with coffee.

Elite has always been EEE-lite as long as I’ve been listening to the local dialect (seventy-five years).

By 1928 two of the Sudekum brothers were managing the Monroe and 4th Ave Elites, indicating Crescent ownership.

The Elite on 2nd Ave S was eventually replaced by the new Capitol (not to be confused with the one at 6th and Church).

The building on Monroe may still be standing- it was in recent years just a half a block down from where the State later stood. The

December 6th, 1907 first ad for an Crescent theatre in Nashville.

rivest266: I assume this must have been the one at 233
Fifth Ave North. Thanks for the into.

Does TLSLOEWS still belong to this great site?

December 25th, 1959 grand opening ad as Crescent in photo section. It opened on February 19th, 1912 as Princess. No ad found, only an article.

You’re confusing two Princesses. The old Princess was in the next block just east of McKendree Church; it opened in 1912 and closed early 1950.

All of this took place on Church Street and none of this relates to the Crescent at the top of this page and which was on Fifth Avenue.

I want to go back to the subject of the twin theaters which were merged to form this Crescent Theater at 215-217 Fifth Avenue.

I mentioned above that I believed the this Crescent was the result of a merger of twins called the Ruby and the Rhinestone. I have googled this matter and cannot any reference to these two names except for my comment here.

I have found in a January 1908 periodical called the Conjurer’s Magazine, for magicians that “King the Slight-of-hand King was playing the Rhinestone in Nashville. This would indicate that at least one of the twins had a stage.

Some of you may be familiar with the Crescent Amusement Company’s 1957 publication – just a folder really- honoring Mr Tony Sudekum and the fiftieth anniversary of moving pictures in Nashville. I quote the reference to the twins. “The company (Crescent Amusement) took this name from a theater on Fifth Avenue, which "Mister Tony” had acquired. Earlier it had been the Twin Theaters- two theaters served by one ticket office. “Mister Tony” removed the partitions. He changed the name to ‘Crescent’ and gave the new name to his company."

Can anyone come up with a reference to the names Ruby and Rhinestone in Nashville? I have looked (through some but certainly not all) newspaper microfilms prior to the merger and found zip.