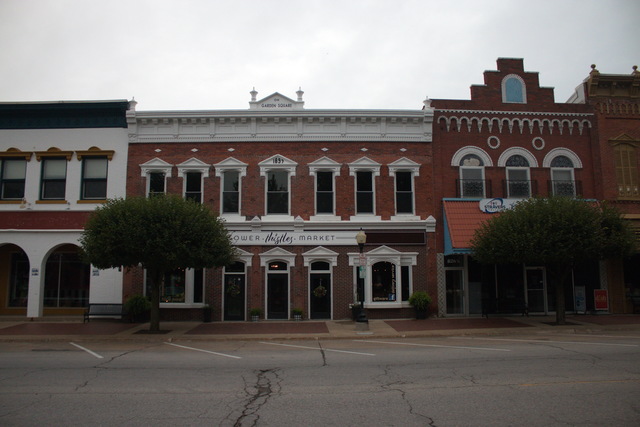 In the early-1960’s I went to Central College in Pella. This was the only theatre in town. I think it was one storefront wide. It seems like it had three or four seats on one side of the aisle and four or five seats on the other side of the aisle. It would really be filled up on weekend evenings. It and another building have been combined and it is now occupied by the Pella Music Store and neighboring offices.

WARREN, I don’t think Pella, in those days could ever have supported more than one theatre (in 1960 it had a population of about 5000 plus 500 college students). I seem to remember seeing something about the Strand, I need to check that out. For the New Holland I also have just seen the 832 adddress which is so close a number it’s got to be the same place, and that it was owned by Findley’s Theatres from 1998-2000 (I think that might really be for the 810 Washington theatre). I also have something on a Pella Theatre in 1935 and that wouldn’t be the Pella Cinemas which are newly built.

LOST MEMORY, Alas there is no NEW in front of Findley’s Holland Theatre I think it’s a completly different theatre which would sorta be near the northwest side of the square, the New Holland was on the east side of the square, just about exactly where I remember it being. The Findley Theatre was on my sheets of theatres to add to Cinema Treasures. Perhaps when I get all the Pella theatres on Cinema Treasures, I’ll print them all up and send them to the Pella Hitorical Society and see if they have any other info, cause I’m getting all confused!

Bob “VANDER” Jensen
(about the “VANDER”, When I went to college in Pella with all the Dutch there and last names that started with VANDER, VAN, DE, etc., I added the “VANDER” to my Danish Jensen just as a joke to make me fit in better).

I was just in Pella and went to 832 Main to check it out. This was definitely a theatre, but I think it was a long, long time ago, i.e., maybe in the silent movie era. The upstairs floor is slanted, but I don’t think it was a balcony. Rather, I think the upstairs was where the theatre was, and downstairs was something else.

The Pella Theatre reopened as the Holland Theatre on November 17, 1938. The opening day movie was “Snow White and the Seven Dwarfs”.

The Wolters Home was built by Jan Heukleman Wolters in 1848 at 810 Washington ST. After a couple of different owners, the house was sold to the Pella Historical Society in 1936. By 1965, the Pella Historical Society moved to the Wyatt Earp house and sold the property on Washington St to the Pella Theater Corp., who moved its Holland Theater from 832 Main St. to this building, holding a grand opening on March 24, 1966 with a showing of “Shenandoah” starting Jimmy Steward. The theater seated 350 people. It continued to operated on Washington St until 2001 when the opening of the Pella Cinemas Triplex forced its closure.

Ooops, in the last comment, it should read “starring Jimmy Steward”.