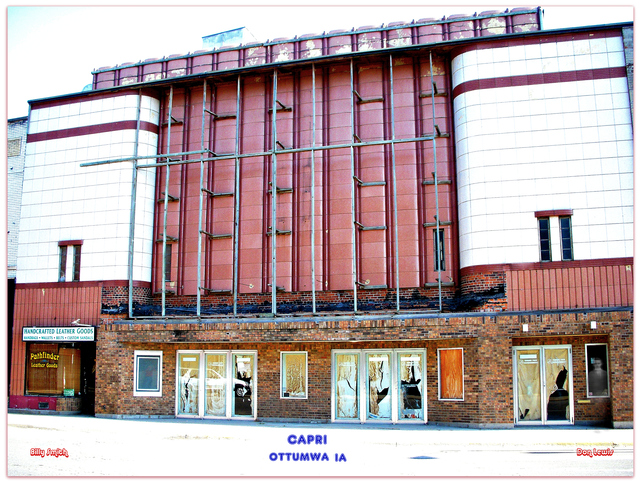 Central States Theatres was the chain for this theatre. I think the building was built for something else because on the side of the building you can see windows on each floor that have been filled in.

It was previously the site of the Princess Theatre of 1914 which became the Square Theatre in 1930. Around 1935 it became the Ottumwa Theatre and was destroyed by fire in 1941. It was rebuilt in 1942, later becoming the Capri Theatre. It was converted into five screens by the late-1980’s, when it was sub-divided and also incorporated the adjacent Capitol Theatre, becoming the Capri V Theatre. It closed in 2005.

The marquee read:
NEW OTTUMWA 8 OPEN ACROSS FROM APPLEBEES’S

Capri V ~early 80’s-~2005? The Capri was made into 4 cinemas and was combined with the next door Capital Theater. Can anyone verify these dates?

Had 1000 seats before being made into 4 theaters.

There’s a mistake in the last paragraph of my previous comment: The photo caption I mentioned that has the names of the other three theaters on the block belongs to the ca.1927 photo from the book “Ottumwa,” not to a 1942 photo.

As the Capitol was eventually incorporated into the Capri V, it might make sense to have Capitol Theatre listed as an aka, even though the Capitol had a long history as a separate house with its own address, and has its own page at Cinema Treasures. On the other hand, the information is already included in the description of the theater, and as the Capitol does have its own page I don’t think it’s essential for the name to be listed as an aka. Having aka’s listed facilitates searches of the site, but the Capitol’s own page will be easy enough to find.

The aka’s that should definitely be listed for this house are Ottumwa Theatre and Capri Theatre. As late as 1985 (see the American Classic Images photo from that year to which Chuck linked above) the Capri was still operating as a single-screen house under that name.

I’ve been unable to discover exactly when the two theaters were combined and remodeled into the five-screen Capri V. I’ve searched Boxoffice Magazine’s archive, but it contains surprisingly few items about Ottumwa, and I’ve found no items at all about either the Capri or the Capri V.

I’m not sure if the name Square Theatre should be an aka or not. Though it’s not absolutely certain, I think that the original Square Theatre building on the Capri’s site was probably completely demolished after the 1941 fire. Maybe, like the Capitol, it should have its own page, though there wouldn’t be much information to put on it.

The Ottumwa Theatre built on this site in 1941 to replace the earlier Ottumwa Theatre, which had been destroyed by a fire, was designed by the Des Moines architectural firm Wetherell & Harrison. There is a photo of the theater in this PDF of two forms the firm submitted to the AIA in the 1940s. The photo, which also shows part of the adjacent Capitol Theatre, is about 2/5 of the way down the unpaginated document.

It is sad to see structures that have mad an impression on our lives closed and forgotten. I made Ottumwa my home for 10 years and had seen the larger companies come in and benefit from the neglect towards the smaller, older businesses. With that came the new theater…. nothing wrong with that but it is a box with no character or class. Plus it is no different then any other theater. Now this brings forth an opportunity for something with charisma and style. I am pursuing reopening the old Capri into an Experience. Dine in, bar, music, theater, and dancing within facility. I am seeking other visionaries to make this a reality. reply to

I wish you luck MasterLong, I lived in Ottumwa for a short time and watched the place just get worse and worse and even now, the place seems overrun with illegals in street gangs, drugs, violence, its a real mess down there. The place has such an interesting history, it would be nice to see it brought back.

I would think since the Square occupied the same space as the Ottumwa, it would be safe to make it an aka for the Ottumwa theater. So strange that 2 theaters were built smack dab mext to each other and managed to stay around for so many years, existing next to each other.

Perhaps there is a future for this theater after all…

OTTUMWA, IOWA — With the ongoing effort of revitalizing downtown Ottumwa, the Legacy Foundation has recently purchased the two buildings on Main Street that were once the Capri and Capitol Theaters.

It was less than 50 years ago when these two theaters attracted people from all over Iowa to the heart of downtown Ottumwa.

Executive Director of the Legacy Foundation Brad Little said he wants to help bring the memories so many people had of the pristine theaters back.

But how long the restoration will take and how much it will cost is still up in the air.

“Our philosophy at the foundation has been, let’s do it right, let’s not cut corners, let’s make sure we think this all the way through and there are a million and one things we could do with that space. It’s enormous, both facilities are huge and so we want to make sure that at the end of all of this, when we cut the ribbon on those facilities that they also need to be sustainable,” Little said.

Little said the ideas that are presented have to make sense for the long term sustainability.

When the original theatre burned, Myron Blank son of A.H. Blank was in charge of building the new theatre which was quite a challenge due to all the shortages during WW II.

The Wednesday, May 27, 1942 issue of the Ottumwa Daily Courier said that the new Ottumwa Theatre would open on Friday, May 29. The original theater had been destroyed by fire on April 21, 1941.

I’ve also uncovered a bit more of the first Ottumwa Theatre’s history. A 1914 Polk directory lists the Princess Theatre at 229 E. Main Street, as does the 1914-1915 American Motion Picture Directory. The July 11, 1925, Moving Picture World said that $40,000 would be expended on remodeling the Princess Theatre. The Princess is last listed in the 1926 FDY and the Square appears in 1927, so 1926 must have been the year the name was changed, perhaps early in the year and after the completion of the remodeling that had been in the planning stage in mid-1925.