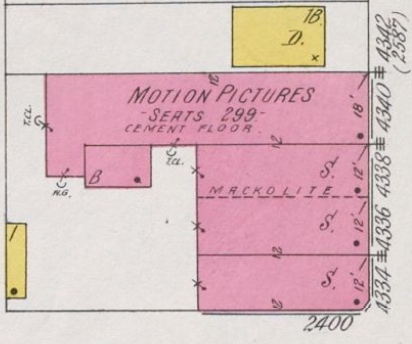 This little theater was in operation from at least 1911. It stood on N. Western Avenue near W. Pensacola Avenue in the Lincoln Square neighborhood not far from Welles Park. It was closed and demolished during the 1920’s, and a three-story apartment and retail building was built on the site.

Architect Harry I. Dalsey was taking bids on a one-story brick building to contain three stores and a 300-seat movie theater at the corner of Western and Pensacola Avenue, for owners Kusel & Harns, as noted in the November 8, 1912, issue of Construction News.

If the Favorite Theatre was in operation by 1911, perhaps its original building was replaced in 1912-1913. And as the three-story building on the site today has four storefronts, perhaps the 1912 building was not demolished in the 1920s, but had the two floors of apartments added above the existing brick building, and the theater was converted into a fourth storefront?

Sanborn map added. Looks like an entirely different building to me.

Broan: Is there a date for the Sanborn map? If it’s post-1912, it makes me think it even more likely that the 1912-13 structure was at least in part expanded upward rather than entirely demolished. Satellite view shows that the section fronting Pensacola Street, in the area that is unbuilt on the Sanborn map, looks like it is a separate but partly attached structure, though tied into the rest of the street front by a facade of light brown face brick. It seems like this configuration would not have been done had the building been entirely new in the 1920s.

The configuration of the storefronts is the same in the current building as on the map, with three narrower stores at 4334 through 4338, and the wider storefront at 4340 where the theater was, with a new door added at its south end for access to the apartments upstairs. The rear building on Pensacola has what looks like its own entrance, with a fancy white plaster or terra cotta surround. It looks like the corner storefront has a back door on Pensacola, too.

There’s also something odd at the rear of the theater’s footprint. A second floor section looks like it isn’t attached above the first floor to either building. I wonder if it might be small living quarters, or an office, for the storefront where the theater used to be, accessed only by a stairway within that store?

That’s weird, I put that it was a 1913 map but that information seems to be lost. I’d think for structural reasons it would be unlikely to convert a single-story retail building to a three-story retail & apartments. Light wells, stairs, basement, and all. I think it’s possible that the party wall and maybe the shell of the back part of the building were reused, but I doubt any significant amount of it was retained. Interesting, though.