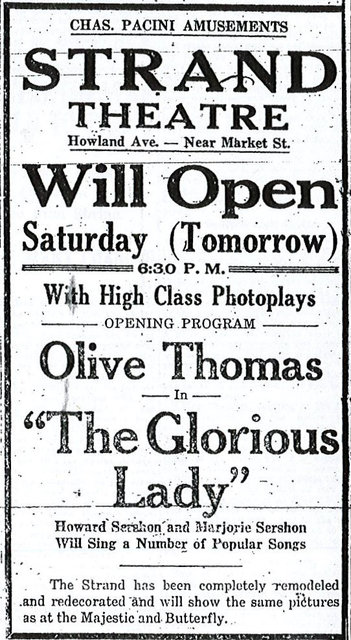 The Crystal Theatre was opened December 5, 1913. It was remodelled and reopened as the Strand Theatre on September 4, 1920 with Olive Thomas in “The Glorious Lady”. The Strand Theatre served Kenosha’s Old West Side on the former Howland Avenue (now 22nd Avenue) and was a plain brick-front theatre with double-hung front windows. The Strand Theatre offered silent films and vaudeville programs right up until until esarly-1927 when it closed.

The Strand Theatre was renamed the Norge Theatre, reopening on April 4, 1927 with Wallace Beery in “Behind the Front”. It was very likely named to honor the then-timely adventures of the famed airship Norge (pronounced “NOR-gay”). It seems the film accompaniment was via a piano, and some local amateur acts were offered.

A longtime area resident told of attending the 1927 “The Phantom of the Opera” when the nitrate film caught fire and the quick-thinking projectionist grabbed the flaming reel and pitched it out the south window onto the pavement.

After the Norge-nee-Strand Theatre closed, the building was the Pacetti Food Shop for decades, and by the 1970’s was the Second Time Around furniture retail store and factory.

The end came for the building in early-1982 when a freak heavy wet overnight snowstorm weakened the façade, bulging it outward visibly. Alarmed passers-by notified city inspectors who barricaded the area and ordered immediate demolition. The lot is now a paved parking lot for area businesses.

The STRAND Theatre (aka NEW STRAND) was originally the CRYSTAL Theatre and was renamed and opened as such on Saturday, September 4, 1920 after renovations during a closure of several weeks. A new facade, wall sconces, new furniture and a piano were installed along with new projection equipment. Willard Welch was the manager, and the NEW STRAND’s opening feature film was “The Glorious Lady” starring Olive Thomas. On stage that night, Marjorie Sershon sang popular songs accompanied by Howard Sershon. The NEW STRAND was part of the Charles Pacini Amusements local theatre chain. Pacini had been planning the renovations at the time he was murdered; the case was never solved.

(Janesville WI Gazette, November 21, 1923) THEATER CLOSED FOR TAX FAILURE Konosha. —Representatives of the federal collectors of Internal Revenue this afternoon padlocked the Strand Theater in Kenosha on the claim that the theater had failed to pay taxes on admissions since January. The tax with penalties was alleged to amount to more than $3,000.

A new shrine for the “silent drama” is to be opened in Kenosha on Saturday when “The New Strand”, one of the theatres now being operated by the heirs of Charles Pacini, and located at 210 Howland avenue, will start operation after having been closed for several weeks for extensive remodeling and redecorating. The plans for the new theatre were made by the late Charles Pacini several months before he was killed. He purchased the lease for the theatre, formerly known as the Crystal, and let contracts for remodeling and redecorating, all of which were practically completed at the time of his death.

The theatre has been made over completely. Starting with the new façade, a beautiful entrance to the movie house and continuing throughout the entire interior of the theatre, it has been transformed completely.

In announcing the opening of the “New Strand”, Willard Welch, the manager of the Charles Pacini Amusements, emphasized the fact that the new theatre would be part of the Pacini theatres and would show the same class of pictures which are shown at the Majestic and Butterfly theatres. Their contracts include the latest releases from many of the largest film companies in the country.

The opening picture will be Miss Olive Thomas in “The Glorious Lady”.

(Thanks to Al Westerman for his exhaustive research.)

Norge Theater Opens Saturday – New West Side Theater Makes Formal Bow in Kenosha This Week —— The Norge theater, formerly the Strand on Twenty-Second avenue, will have its first program on Saturday afternoon. The theater, completely re-decorated and re-equipped at a cost of $10,000, makes its introduction as one of the prettiest neighborhood theaters in this section with every effort made to provide the most comfortable and most convenient entertainment available. Opening Saturday with Wallace Beery and Raymond Hatton in “Behind the Front”, the theater will begin a policy of entertainment that will make it one of the most popular show houses of the city. Everything in the way of equipment is the most modern in the industry and nothing has been spared to make the Norge as attractive as possible. Opening the programs will be Miss Anna DeFazio, a brilliant young Kenosha musician at the golden-voiced Bartola organ. Miss DeFazio will be the regular organist at the theater. An orchestra offering popular music will also take part in the day’s program. A special program has been planned for Sunday beginning at 1 o’clock. The motion picture feature is Richard Dix’s famous “Lucky Devil”. In the evening there will be vaudeville. For the first time Kenosha will have an opportunity to hear and see the Salerno brbthers, famous entertainers in voice and accordion from WGN Chicago. The theater management will offer souvenirs to the ladies on the opening day. Fred N. Logue, the manager of the Norge, will be present to greet the many patrons of the theater. The policies of the theater as announced today by Manager Logue include performances each evening and matinees on Saturday and Sunday with vaudeville on Sundays. Popular admission prices will prevail. (March 31, 1927 – Kenosha Evening News)