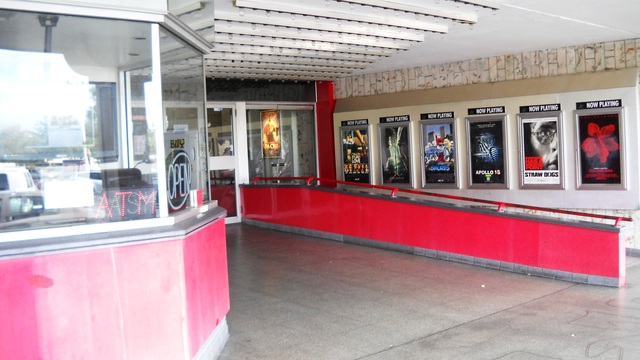 The Britton Theatre was opened August 15, 1956 as a 2,200-seat single screen theatre with a balcony. The opening movie was Ginger Rogers in “The First Travelling Sales Lady”.

The Britton was probably the finest single screen theatre in Tampa when first opened in 1956 before being destroyed by GCC in 1973. Capacity of the single screen Britton was 2200 seats and included a balcony. It was huge and very modern for its day. Some films I remember seeing on the Britton’s 60-foot wide screen were WEST SIDE STORY, SPENCER’S MOUNTAIN, CHILDREN OF THE DAMNED, WHAT A WAY TO GO, PLAY MISTY FOR ME, and LET’S SCARE JESSICA TO DEATH. The final film shown on the original big screen was THE LEGEND OF BOGGY CREEK in 1972.

When the BOGGY CREEK run ended GCC closed it for several weeks reopening it as a triplex in 1973. All the character of the original Britton was destroyed—it was pretty bad. Evidently proud of the job they had done GCC then quickly twinned the Loew’s Theatre on Westshore effectively destroying another beautiful theatre. In 1992 Movieco took over ownership of the Britton and cut it into an 8-plex—it was horrendous. I only went once out of curiosity and never again.

Has anyone noticed this is running like a 4plex?.. i havent had time to go that way recently, but strikes me odd. Just like ybor 20 once taken over by Carmike (AMC now) only 10 of the 20 screens are functioning.

The same thing is happening where I live with the local second-run theatre. They only show movies in 3 of the 5 auditoriums because of the cost of converting to digital projection. At this time, they could only afford to buy 3 projectors.

cvolosin is the Carmike/AMC merger finalized? I like Nick went to this theater once after it became an 8 plex and never again. What a horrible experience it was just once. My living room was bigger than some of the theaters.

Trollyguy i know that they were going to close the balcony theaters because of accesability, i know they have digital 3d for one screen but seriously it was so dirty and dingy. I walked thru the place with realitors before it reopened. The web page is not the same im wondering if it is new operators? My work doesnt take me that direction anymore so im not too sure whats going on.

I just checked today’s schedule. Four features are listed: Jungle Book, The Huntsman, Barbershop, and Batman vs. Superman. So only 4 auditoriums are active. There are 67 reviews on Google for the Britton. Surprisingly the good reviews far outweigh the bad. Maybe they’ve made some improvements. Regardless I still have no desire to visit.

This reopened as Britton 8 on November 25th, 1992. Grand opening ad in the photo section.

Website is down. Phone disconnected. Current phone is 813-839-1600. You will get ahold of someone who works there and can tell you what movies are playing. They do have a Facebook page but no movie times on it. Best to use Fandango or Moviephone to find out what is playing.

They are listing movies on fandango, BUT that can be ghost times, or times that were published before the theater decided to close.. it is bound to happen SOON..considering there are 4 movies playing in 3 auditoriums, and this has been practice for the last year…