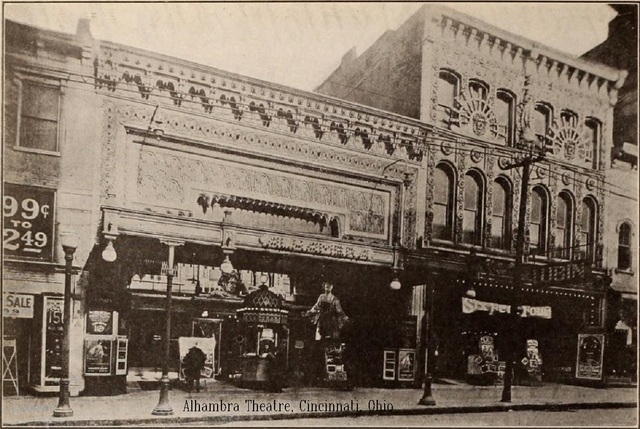 The Alhambra Theatre built as a nickelodeon show by Jackson & McMahon firm who also owned a film exchange in the city and were involved in early Marcus Loew nickelodeon education. It was opened in 1910 and closed in 1929.

Demolished sometime in the 1940’s. The Alhambra Theatre had many names in it’s lifetime, and many owners.

This Alhambra was one of many early nickel houses on West Fifth St. Not far away was the Lubin Cinema named for Lubin of Philelphia,Pa.

Chuck1231 As far as I can ascertain there was only one Alhambra, and you are correct it had a very eleborate facade with much crinolation. Twas ment to look Oriental and mysterious for potential passers-by, hopefully snagging them as ticket buyers!

“The Cincinnatian,” a magazine published by the Cincinnati Chamber of Commerce, listed in its issue of March 29, 1915, theaters then showing movies. The Alhambra was listed at 146 W. Fifth Street. As that’s the same address listed in the 1923 city directory, I suspect that 146 is the correct address.

The 1915 magazine listed three moving picture houses on Fifth Street: The Alhambra at 146, the Avenue at 122, and the Lubin at 140. Cinema Treasures has the Avenue and Lubin listed at those historic addresses, so it’s unlikely the Alhambra’s parcel was renumbered.

Moving Picture World of April 17, 1909, reported that the McMahon & Jackson Motion Picture Company had been incorporated at Cincinnati, with a capital stock of $10,000.

Actually, the 1915 book had four theaters listed on West Fifth Street. In addition to the three noted in my comment above there was the Colonial at 128 West Fifth. That block must have been lively then, with four movie houses on it, and all on the same side of the street.

As you’ve noted Joe V. that stretch of West 5TH. street was very busy for nickel houses in those early days, today the area is filled with hotels,a Macy’s,and parking lots.McMahon and Jackson were big bookers locally from which your film product could be rented,plus they had a string of local theatres. Since they located their nitrate film storage warehouse downtown a few years later our fire dept. asked that film row be moved safetly to a less heavily populated section of the metropolis . Later on film row populated Central Parkway near Liberty Street where today some of those repositories still stand and are used for other purposes.

The Alhambra Theatre was listed at 144 W. Fifth Street in the 1910 city directory. I don’t know if the theater later moved or was expanded or if the building was renumbered.

Hello Dr. Joe Vogel, Is there a source on line for Theatre Catalogue? If there is I bet you know. Until soon,Hank Sykes