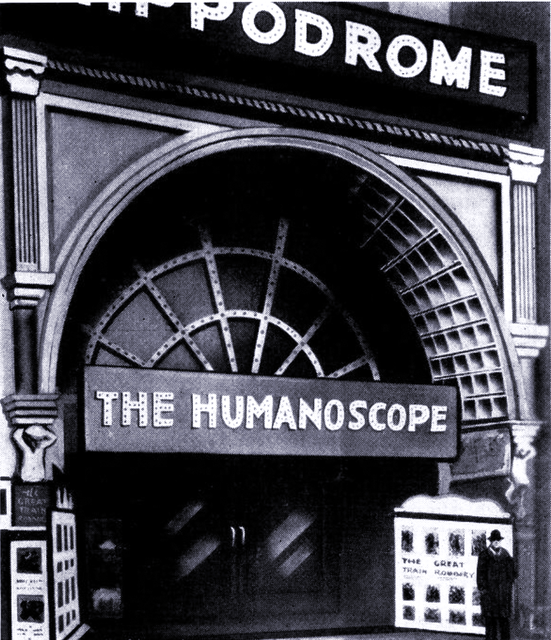 The Mills Edisonia of Chicago, opened in 1904 at Fountain Square was probably the first film venue in Cincinnati, a penny arcade. It had a 100-seat capacity.

About 1905 it became the building for the Hales Tours (a national travelogue craze) whereby the interior of a storefront was converted into a passenger railroad car with an observation window in its furthest end including a white rear screen projection sheet. Tickets were sold like train tickets, ushers were dressed as conductors, rumbling sound effects were included. The film shown was of a trip to California. Views provided by placing a film camera upon the front of a locomotive as it hurtled down the tracks on its way to some sunny destination. Small boys were employed to blow whistles, pump small pipe organs, plus other sound effects to add to the viewer’s realism.

Hale was a the former Fire Chief of Kansas City, Missouri who gave up fighting fires to man the cash box of this short-lived, though profitable, venture as it traveled nationwide. Eventually this building morphed into Marcus Loew’s Hippodrome Penny Arcade of 1906.

In 1909 it was enlarged/rebuilt? and opened as the Gayety Theatre. It retained this name until 1913 when it became the Star Theatre which was still open in 1927 by which time it had become a burlesque theatre. It was renovated in 1933, but on June 13, 1934, the manager was murdered. The theatre was closed and it never reopened. It was sold in 1934 and was demolished.

This cinema was also called ,“The Gayety ”,in its earlier days making it harder to trace as 3 Gayety Theaters in Cincinnati florished over the decades.Another Gayety was located on Walnut St near 6th.,plus the scandalous Empress/Gayety burlesque house on Vine Street where now the Main Library resides. None of these three simular named venues existed at the same date, but newspapers then didn’t always use street designations when writing about them,hence the mindboggling maze when searching for info.

I have reset the site for Star Theater on Fountain Square between two green trees and next to Fifth/Third Bank Tower. The map view above shows Star’s site incorectly as further down East Fifth Street. Stars site was almost at E.Fifth Street and Walnut St.

This paragraph is from an article about Cincinnati’s movie theaters that appeared in the July 15, 1916, issue of The Moving Picture World:

“There was another Gayety in Cincinnati a few years back, this being the name first borne by the Star, on Fountain Square, referred to above as standing on the site of the former Loew arcade. The original Gayety was opened seven years ago, a year after the Bijou, its nearest competitor, by Ed. Hart & Co., the name being changed to the Star when the burlesque house was opened under the same name. Like its neighbor, the Bijou, it has always done a big business at its five-cent admission charge.”

That would indicate that this house operated as the Gayety from 1909 (the year after the Bijou opened) until 1913 (the year the Gayety Burlesque opened) and then became the Star.

The Mills Edisonia opened at this location on October 12, 1903. Later as a movie house, the Star Theatre did not convert to sound in 192 7 but continued as a live burlesque house and received a refresh in 1933. The Star Theater’s manager was murdered there on June 13, 1934 which appears to be the day they decided to close up shop. The theatre was sold soon in July of 1934 and demolished.