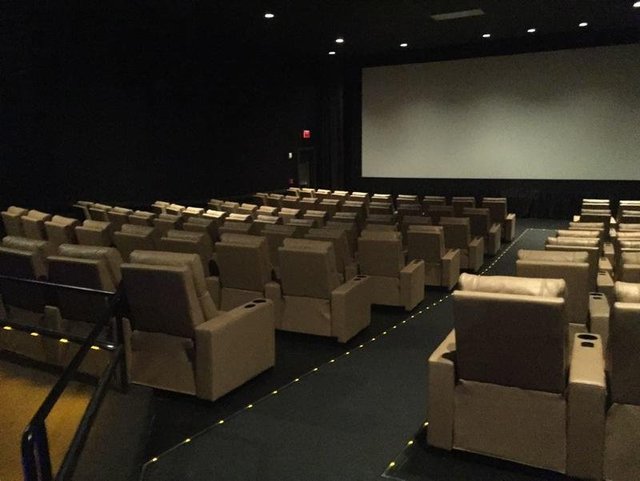 Located in Peachtree Corners to the north of Norcross. This was initially a six-screen cinema opening December 15, 1989, in a former grocery store. Later increased to ten-screens. Two of these were later converted into an arcade.

By 2010, it was being operated by Phoenix Big Cinemas. Taken over by NCG Cinemas it was remodelled and reopened November 19, 2015 as NCG Peachtree Corners.

I always wondered what happened to Flipper after his show was canceled. Maybe his residuals ran out.

Here are some pictures.
View link

This theater was bought out in late 2006. It is now owned by Galaxy Funplex and the theater is now Galaxy Funplex Peachtree 8. Here is the website: http://www.galaxyfunplex.com

It has a HUGE arcade and 8 screens. It used to be a 10 screen, but when Flippers owned it, they turned 2 of the auditoriums into the arcade.

This was called Peachtree Corners at one time. I believe it had all 10 screens from the beginning. Opened around 1990. Average state-of-the-art mulitplex for the time.

This place is a dump. I’ve been there a couple times over the last year, but I don’t go often because it is so run down. The sound quality and acoustics in the theaters are terrible and the hallways outside the theaters are poorly lit (read: dark and creepy). There are also old pieces of broken vending machines and jukeboxes just laying around. I feel really uneasy when I go to this theater and I have never felt that way inside a theater before.

Also, how are they making any money? Anytime I go, the movies never sell out. I’d say 5 or 6 of the 8 movies they run at any given time are now Bollywood movies. Is there that big of a Bollywood market in Norcross? Also, I have NEVER seen ANYONE at the arcade (which is quite large for a movie theater, I must say). You’d think they would just rip the machines out and re-install the 2 auditoriums they originally had. Arcades are dead, man.

By the way, this theater is called “Big Cinemas Peachtree Funplex 8” now. It was renamed during summer 2009. Can anyone confirm it changed ownership? If that’s true, and if I’m understanding this right, that would mean this place has changed hands like 4 times in the last 5 years.

I think this place’s days are numbered because this is exactly what happened to Holcomb Woods and look where it is now.