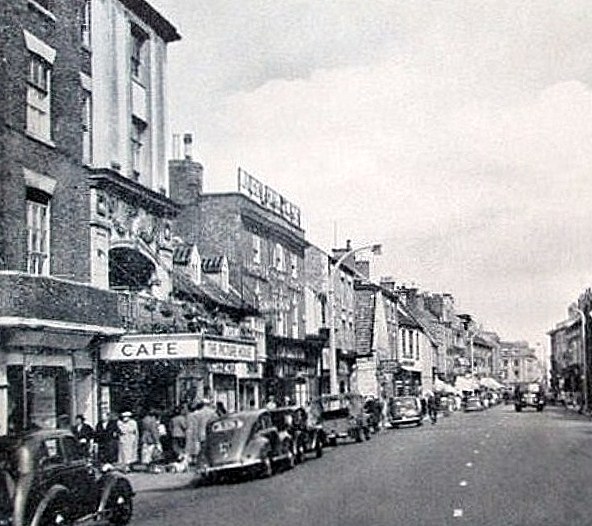 The Picture House opened on 14th February 1916 with “Julius Ceasar”. It had an attractive facade which was decorated in Doulton ware ceramic tiles. The walls of the foyer were lined with oak wood panels. Inside the auditorium seating was provided in stalls and circle and the decorative style was Georgian. There was a four-piece ‘Picture House Concert Orchestra’, to which was added a Grand Concert Organ specially built by Messrs. Walker of London. Other facilities included a cafe and smoking room.

In 1937 the new State Cinema was built only 30 yards away on St. Peter’s Hill and sometimes queues for the two cinemas got intertwined.

The Picture House was operated as an independent cinema throughout its life and was closed on 30th June 1956 with John Wayne in “Reap the Wild Wind”.

It stood empty for several years until April/May 1961 when it was demolished and a Tesco supermarket was erected on the site. This later became a Bejam supermarket and was later operated as JJB Sports. In 2018 it was a cafe/bar named Cinco Lounge.