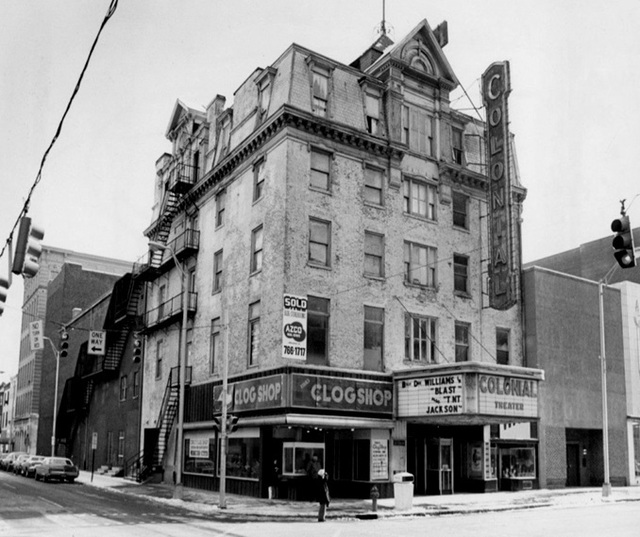 The Colonial Theatre was opened on November 4, 1912 with movies and vaudeville. It was still operating as a movie theatre in February 1977b but had closed by 1978 when the empty building suffered some damage in a fire. It was added to the National Register of Historic Places in 1982.

More interesting is an item in a magazine called New York Topics and International Courier, issue of June 27, 1914:[quote]“‘Local talent is now being enlisted in the 'Moviement,’ according to an advertisement appearing in newspapers of the Pennsylvania Capital:

“Well, if Gifford Pinchot wins that Keystone State Senatorship there will be a fine bunch of Penrose machine politicians available as ‘movie actors’ in Harrisburg.”[/quote]I’ve found nothing else about this attempt to launch a local movie production industry in Harrisburg, but it apparently did nothing to help business at the Colonial. The July 31, 1915, issue of The Moving Picture World ran this item:

“The Colonial theater, Harrisburg, Pa., prominent vaudeville and moving picture establishment, recently closed its doors to the public and will remain so for several months to come, according to announcement made by the management. No definite reasons were assigned for the temporary closing of the theater, but it is generally supposed that the closing Is a matter of business policy decided upon to prevent operation at a loss, for at this season of the year the theatrical business is very poor. The coming to Harrisburg of an International League baseball team has had a decided effect upon the attendance of the afternoon matinees at the theaters.”

This is a grainy and not especially good crop of the Colonial marquee. I wish I had a better one.

But my FLICKr caption give a detailed description of the unusual L-shaped entrance/vestibule area which had doors on both Market St. and 3rd St. and enclosed a commercial business which was on the corner of those streets.

It’s also of interest because the marquee is no longer advertising movies, but Harrisburg’s traditional balloon parade (which I remember from when I was a kid) and an “Elvis” concert!

Ar the risk of being compulsive, here is a lighter variation of the Colonial color transparency which shows up the marquee better.
Take your choice:
View link

I wonder if gremlins got into somebody’s keyboard along the way, and the “Flin, Cla” that the NRHP document (cited in the very first comment on this theater by LostMemory) names as one of the architects or builders of the Colonial Theatre is actually Fuller Claflin? Claflin did design at least one theater in Harrisburg- the Lyceum (later the Orpheum), built in 1903 and reportedly demolished in 1925 to make way for the State Theatre. I’m skeptical that anyone has ever borne the odd name Cla Flin.

I’ve found a number of errors in the NRHP’s listings, usually misspellings and sometimes wrong dates. I doubt that they’ll ever get around to correcting them. But “Flin, Cla” is one of the oddest things I’ve seen there. It sounds like it would be the name of a character in a bad sword and sorcery novel.

The story I heard about the Colonial from a veteran vaudvillian who had a dance team with his wife (and later was Mae West’s road manager), they loved playing the Colonial; it was a short skip and a jump from the train station with their trunks and props down the alley to the Colonial’s backstage door.

A short article in the November 20, 1978 issue of Boxoffice said that the Colonial Theatre in Harrisburg had suffered major damage from a probable arson fire on October 29. The house had been permanently closed some years earlier. The article noted that part of the building dated back to the mid-1830s, when it had housed the Wilson Hotel. The building was partly demolished and rebuilt and opened as the Colonial Theatre in 1912.

Still operating as of February 16, 1977, when this theater made what must have been a very rare appearance in the Philadelphia papers' display ads, showing the double bill of “Blast” and “TNT Jackson” (seen on the marquee in one of the pictures). Only a few Philly-area theaters booked this pairing, so the ad space was padded with some houses in outlying cities.