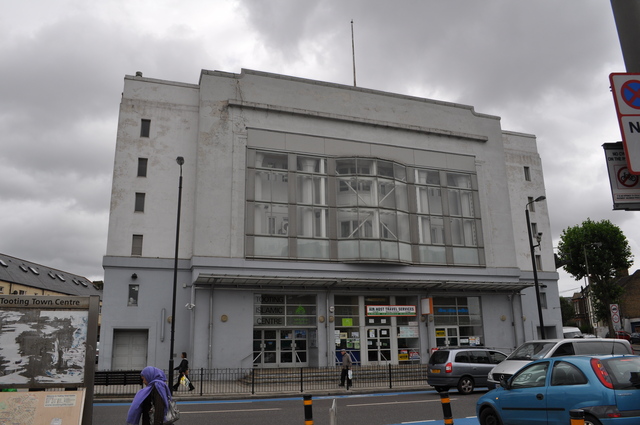 Located in the south London district of Tooting. Designed by architect Harold Seymour Scott for the independent B.H.S. Syndicate Ltd. This was a good example of a suburban movie palace, opening only 5 months after the magnificent nearby Granada Theatre, Tooting.

The Mayfair Cinema opened on 15th February 1932 and was equipped with a Christie 3Manual/10Ranks theatre organ which was opened by Herbert Maxwell. Later resident organists were Jack Courtney and Clifford Birchall. Built for cine-variety the proscenium was 46 feet wide, the stage 20 feet deep and there were nine dressing rooms. It was equipped with a Western Electric(WE) sound system. Other amenities were a cafe and a dance hall.

It was taken over by Associated British Cinemas(ABC) in May 1933 and it was re-named ABC in 1963. It was closed for alterations in May 1971 when the rear stalls were converted into a Painted Wagon pub. The cinema was retained using the circle only and this re-opened in July 1971.

It was taken over by an Asian independent operator and the original Mayfair name was re-instated. Regular films continued until it finally closed on 13th January 1979 with Robert Shaw in “Force 10 From Navarone”.

The Painted Wagon pub continues to remain open but the rest of the building was stripped of fixtures and fittings (including the Christie organ). The right hand side of the foyer was converted into a Bank of Baroda in March 1985 and inside the auditorium a concrete floor was built forward from the front of the circle to the rear of the stage wall. The front stalls and stage area was converted into a snooker club while the circle and upper parts of the building were left unused and derelict.

Scroll down to see a photo of the great looking Art Deco auditorium of this theater:
View link

Page 12 of brochure linked above.

Fab picture you found Howard : I used to go there as a kid,,but when it had been sub-divided and the upper circle was shut off from the main auditorium !

My friends and I got barred from this cinema!

I used to work as a Doorman in the 1970 when Mr Nethercoat was the Manager …… we told people the place was Haunted and the ghost flicked peanuts from the Balcony to people below …The truth was as underground trains travelled underneath the building, the vibration made an isle seat pop down and bits of plaster from the ceiling fall off and hit people…a lovely old building with fond memories …..also of Jim the other Doorman and Pearl an usherette