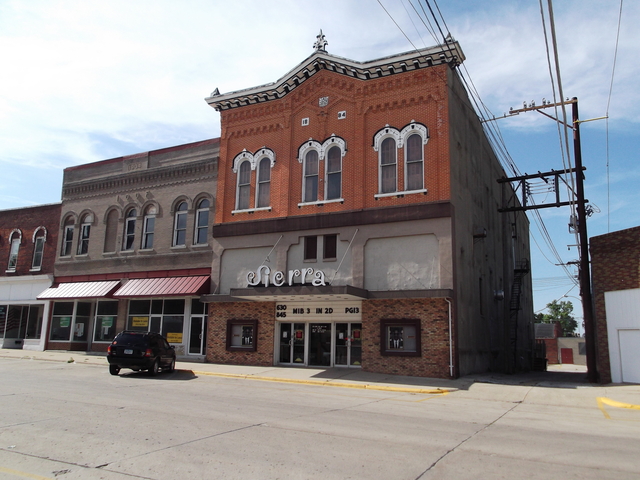 Opened on December 17, 1884 as Head’s Opera House. In March 1931 it was remodeled to the plans of architectural firm Liebenberg & Kaplan. It became the Iowa Theatre in 1935, operated by Finkelstein Theatres with seating listed at the time of 300. In the early-1940’s it fell under the Pioneer Theatres banner and then in 1975 Fridley Theatres took over with a complete remodel. It was operated by Fridley Theatres, single screen with first run attractions until around 2013. It is now run by volunteers as the Sierra Community Theatre.

Here is part of a January 1958 article in the Jefferson Bee:

Cecil B DeMille’s production ‘The Ten Commandments’ will come to the Iowa Theater in Jefferson on Wednesday Feb 5 and will run through Saturday, Feb 15. The motion picture has received world-wide acclaim from the press, advance audiences and ministers of all faiths as an overwhelming motion picture experience.

Ten years in the planning, three years in research, three years in the writing and more than a year in the actual shooting, the picture is by far the biggest production in film history. A dramatization of the Book of Exodus, it stars Charlton Heston as Moses, Yul Brynner as his enemy, Pharaoh Rameses II, Anne Baxter, Edward G Robinson, Yvonne De Carlo, Debra Paget and John Derek.

Don’t like the placement of the Marquee. It was called also in the seventies a Fridley-Luxury Theatre.Must have dropped the “Luxury”.

The NRHP registration form for the Jefferson Square Historic District reveals that the Sierra Theatre was built in 1884 as Head’s Opera House, and was dedicated on December 17 that year. The theater was on the ground floor and a Masonic hall was upstairs. In 1914, the Masons bought the entire building.

The theater was extensively remodeled in 1916, as noted in the December 23 issue of The Moving Picture World, which said that iron columns had been removed and replaced by girders, and heating upgraded from wood stoves to a steam plant. Four boxes had been added, the stage had been remodeled, and new opera chairs installed. The opening program at the renovated house was Griffith’s The Birth of a Nation.

This is no longer operated by Fridley Theatres. It is called the Sierra Community Theatre and is operated on a volunteer basis by the Community. They don’t have a website they use facebook.

The day to day is currently ran by the manager who stayed after the switch from Fridley Theatres on November 2nd, 2012. There have been at least two paid staff ever since.

After the switch we showed a film for the weekend in 35mm. We upgraded to digital projection during the week of November 5th, 2012. This conversion was thanks to the many wonderful sponsors from our community who contributed to our “See You at the Movies” capital campaign.

In the early 90’s when I lived in Jefferson and was building the Niichi plant I remember this being a family owned theater by a local family. They ran movies Fri, Sat, Sun. and had a video rental place downstairs and the son ran a youth dance club upstairs while he was in college.