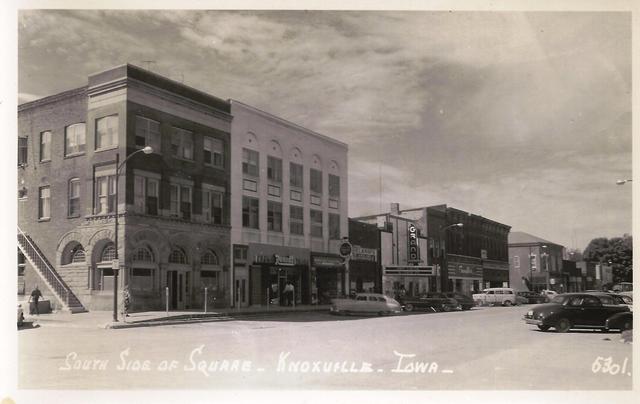 Originally operating prior to 1941, as the 800-seat Grand Theatre. Could not find an opening date for the Village Theatre, but it was operated by Associated Theatres from 1990 until it changed ownership in 1998. Fridley Theatres twinned the Village Theatre and operated it until closure in 2011. Seating is listed at 366. It reopened as the Grand Theater on November 26, 2015.

In 1967, Mrs. Mabel Kerr, owner of Kerr Theaters, operated the Grand Theater and New Hi Vu Drive-In in Knoxville as well as the Noll Theater and Frontier Drive-In in Bethany, Missouri.

Carl Schwanabeck is back running The Village. It must be something about this business that gets in your blood because Carl has to be in his 80’s now and still at it

More history: Before Kerr and Schwanabeck, the Grand Theater was owned and operated by Marvel and Arvene Black (my parents). They inherited the theater from Clara S. Hoffman (my grandmother). Clara Hoffman was well known in the theater industry, having owned several theaters in Iowa and Monmouth IL. The Blacks continued to own the building for a number of years after they had sold the theater business itself.

Small correction to Lon Peterson’s post from 2007. The Grand Theater business was sold to Earl and Mabel Kerr in the late 40’s. There were several managers over the year. George Hart is the only name I can recall. Carl Schwanabeck first came as a new manager, and later bought into the business. He did buy the remaining share from Mabel Kerr. That 1960 date might be right on that part; I don’t know for sure. The rest of the history I have provided is correct.

A couple thoughts on the Village Theatre:

The Grand Theater (as the Village Theatre was originally known) was originally built at this location in 1906 and was, at the time, the finest Opera House around..and was even compared to houses in Chicago. A fire in 1922 destroyed most of the south side of the Knoxville Square, including the Grand. The theater was rebuilt but with a different footprint. Some of our research shows the building/parcel was narrowed from 60' to 40' wide – to better reflect the space needs of film vs. live theater, we assume.

The Black family ran the Grand for many years through the 30’s and 40’s and continued to own the building after their ownership in the business ended. The Blacks were actually the ones to (majorly) update the facade last. Sometime between 1936 and 1938, the brick face of the building was covered in large glass tiles more evocative of the Art Deco style. Shortly thereafter, the Armistice Day freeze of 1941 actually shattered those tiles off the building, at which point, the steel siding was installed in approximately the same pattern.

Kerr Theaters became the owners of both the building and the business at some point after that – not sure of the timeline exactly.

Carl Schwanebeck and his family moved to Knoxville from Perry, Iowa where he had managed the theater for some time. In Knoxville, he managed both The Grand and Marion Theaters for a while, and eventually took ownership of the Grand. Shortly after assuming ownership, the name was changed to the Village Theatre.

Sometime in the early 70’s, the theater was updated to include a renovated lobby and bathroom area, the neon “Grand” sign was removed from the facade (as it was badly rusted and in poor working order), and the theater was twinned and renamed the Village Theatre 2. There were several other renovations over the years including the addition and later removal of the Video Mart which the Schwanebecks replicated all across Iowa and the upper Midwest.

The Schwanebecks sold the theater business in the 90’s and it eventually ended up a part of the Fridley chain of theaters. After several years in business in Knoxville, Fridley decided (as elsewhere) to close the theater and refocus their business on larger multi-screen facilities. That was September 2011.

At this point, our group is organizing and raising funds to purchase the theater and renovate the exterior in such a way that evokes the look of the building as it stood in the 1930’s. The interior will need updates to all the major systems and a new digital projection system.

There is significant interest in this project and we have faith that our fundraising goals will be fairly easily met. That said, if anyone knows of any resources we should investigate, we’d be very interested to hear them!

Marvel (Hoffman) and Arvene Black took over the theaters in 1946 following the death of Marvel’s mother, Clara S Hoffman. Clara Hoffman owned and operated the theaters since sometime in the 30s. I don’t know the exact date.