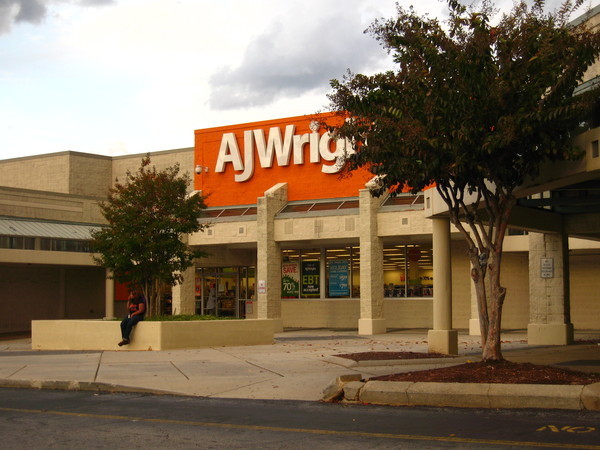 The Hairston 8, along with the Sandy Springs 8 and the Merchants Walk 8, were among the last of the General Cinema crop to take seed in the metro Atlanta area before the circuit went into bankruptcy. The Hairston Village Cinema opened December 9, 1988. It closed in 2000. It was taken over by Entertainemt Film Works and reopened in 2001 screening second run films as a discount house. It was closed in 2005.

Here is a photo of the former Hairston Village Cinema.

Biggest projection booth I ever worked in. Wide and at least 300 feet long for screens 2 through 7 with smaller stubs at each end for houses 1 and 8. All Cinemacannica V8’s, 35MM with screens 3 through 6 equipped with push button Dolby. After it became obvious that this location was built well past the prime years for this area, the Dolby units in 3 and 6 were removed and installed in the Sandy Springs / Parkside 8.

As with most GCC builds of the 80’s, this place was not built until the area was saturated with competition. I think that it opened in 1988 and closed in 1999. Just as with the Parkside, it was reopened as a dollar house by the EFW outfit but closed again after about 18 months. There has been at least one other effort but it failed as well.

Since GCC walked out on the lease during bankruptcy, the had to leave the site intact. This made it easy for a small company to come in a rent a turnkey operation without having to go to the expense of equipping a theatre. As far as I know this is still the situation although I would hate to be the one who had to clean it up to say nothing of what the booth might be like.

This is a better quality building than the recently demolished Stonemont, and the shopping center is newer and in much better shape. So, perhaps the Hairston might dodge the wrecking ball for the foreseeable future, but I doubt that it will ever be more than a marginal location for an independent operator trying to take advantage of the low overhead to squeeze out a few bucks.

General Cinema was a nationwide chain of movie theaters that operated from 1935 until 2002. The theater chain, in its prime, operated approximately 621 screens, some of which were the first cinemas certified by THX. Its mascot was Popcorn Bob and his Candy Band, which graced the company’s policy trailers from 1993 until 2002 and were created by Lucasfilm. For a time, General Cinema also owned the department store Neiman Marcus and the publisher Harcourt Brace, as well as radio stations in several major markets. The company suffered greatly when it filed for bankruptcy protection in 2000 and what remained of the company afterward was acquired by AMC Theatres in 2002. With the acquisition, the Credits program merged into the MovieWatcher network.

The General Cinema Corp. trademark was placed up for auction on December 8, 2010

Regency Exchange in Augusta and the Regency Mall just like this GCC,once they closed everything was left in the Building,even the Popcorn and Candy!

This was a very nice mulitplex as I defected from AMC Northlake Festival since this was a closer drive. Too bad it was built past it’s prime. I saw a lot of movies here in ‘89; “Skin Deep”, “Turner and Hooch”, and James Bond “License to Kill”. WAY WAY too many theatres along the Memorial Drive (and adjacent) corridor at that time. Ironically, are there any theatres standing since that area tanked in the 90’s?

The Hairston 8 was one of eight identical or nearly identical multiplexes designed for GCC by the Port Washington, New York, architect James Thomas Martino.

This opened on December 9th, 1988. Grand opening ad in the photo section.