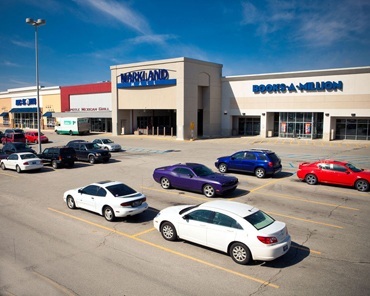 This twin screen theatre was in the Markland Mall and opened in 1968. Later taken over by United Artists it was tripled. It had one large theatre with 850 seats and two nice size ones. In 1990 UA sold the last three remain UA theaters in the state to Goodrich. UA later opened theatres in Indy again. Goodrich split the big theatre in 1991 making it a fiveplex. They had to shut down for a couple days for the final touches and reopened as Kerasotes who by then owned the Kokomo Mall 8.

It was a nice theatre but after they split the big theatre it wasn’t as nice. The new theatres were so small and cramped. It went down hill after Kerasotes took over. It was closed in November 2007.

I hope this takes off. It would be nice to finally give Kerasotes compition. They don’t like compition and usually stomp them out and they do have mob connections.

I went there the other day and it was nice to go in the theatre and no get stuck to the floor which always happened when it was Kerasotes. The only complaint I have about the theatre, which was the one at the end of the hall, is the aisle. You can trip on it if you come in when the lights are down but that is how it was down when the theatre was split.

It was a nice change from Kerasotes. When I got my ticket the cashier was nice and friendly even for someone that came in for a shoe that didn’t show until later. She was fast and helpfull.

The concessions were good as well. The popcorn was actually fresh something you don’t get at Kerasotes.

I didn’t go in the restroom but the rest of the theatre was clean.If they keep doing things like they are it will stay around.

This theatre is now closed. I think it closed in Nov. The mall refused to renew the lease for Hollywood Studio Theatres and planned on putting a few shops in. They have a MC Sports in part of it. I heard they also wanted the Hobby Lobby to go in there which makes no sense because they are across the street in the old K Mart. I think they also wanted Applebees but I’m not sure if it was them.

Kerasotes got rid of the compition pretty fast. They have many years practice snuffing out anyone that gets in their way. In other towns the put a no movie clause in the deed of closed theatres to prevent anyone from going in. In this case Simon ( mall owners ) are just as shady.I wouldn’t be surprised if Kerasotes and Simon were both involved in forcing Hollywood out.

wow bigred. Clearly you have an axe to grind. I’ve been to a few kerasotes theaters. I have never seen what you are describing. Also nearby to one of these theaters two brand new movie theaters went up. While they both give kerasotes serious competition there seems to be no sort of pressure to get rid of them. You seem to just be making wild accusations based on no facts. “Mob connections” really? If you have any sort of proof, then I am more than happy to hear it.

I learned that four screen and one screen cinemas aren’t as profitable as they once were. I wonder how many mall cinemas have fallen or met the axe since the rise of stadium cinemas in the marketplace.

This theater was opened as the Cinema I and Cinema II in 1968 by Alliance Amusements, and house the office of the circuit’s city manager. It was described in Boxoffice’s issue of August 26, not long after the opening. These were fairly luxurious theaters, featuring continental seating arrangements in rows 40 inches wide, 20x40-foot screens, and 70mm capability in the 854-seat Cinema I. Cinema II had 610 seats. Alliance then operated more than 80 theaters and five CATV systems in four states.

The August 18, 1969, issue of Boxoffice referred to the house as the Markland Twin Cinemas I & II, and said they were operated by the Cinecom Theatres Midwest States, Inc. division.

I’ve been unable to find anything about this theater between then and 1991, when the November issue of Boxoffice said that construction had begun to add two screens at the Markland 3 in Kokomo, and that the house would be renamed the Markland 5.

This is not the same theatre that opened as Cinema 1-2. This one opened under United Artist. They ran it until the fall of 1990 when Goodrich. In the spring of 1991 Kerasotes took over when it reopened after splitting the big theatre. The big theatre had around 850 seats before the split and after it there were 3 theatres.

When UA sold it there were 2 others included. I know one was in Lafayette and I think it was the Market Square Theatre. I’m not sure but the other might have been the Muncie Mall. I know that with the sale UA had sold the last of their theatres in Indiana. They didn’t return for a few years.

The cinema 1-2 opened in 1968. It was a bit before my time but I’m told it only lasted a year or so and I think it was on the other side of the mall.

Ok, maybe I can shed some light here. UA did open this theatre and yes Goodrich took it over in 1990 but they actually did all of the splitting of the auditoriums down to the 5 it ended up with. Auditoriums 3 and 5 were very small, about 80 seats as I recall each and the lenses and apertures for those projectors were never designed for such small houses thus a poor quality picture for any movie played in them. The concession stand being right in the middle of the lobby with a built in box office was always a nightmare for any busy movies, besides being remodeled via laminate over wore out cabinets. What a very interesting place to work. I had to jump in and run it many times in my 15 years with Kerasotes as a Manager when they would lose a Manager there. Goodrich left a LOT of hidden treasures in that building for us lol. Still…I do miss the old place, both of the Kerasotes theatres that they closed down right after I left the company here in Kokomo. Wish the new theatre would go all digital so they would stop scratching prints on opening day and remove the lab splices. I go out of town to see movies now when I can.

BTW I’d love it if anyone had any pics of the Kokomo or Markland Mall Cinemas they would share. Thanks!

Status should be closed. Closed November 2007.