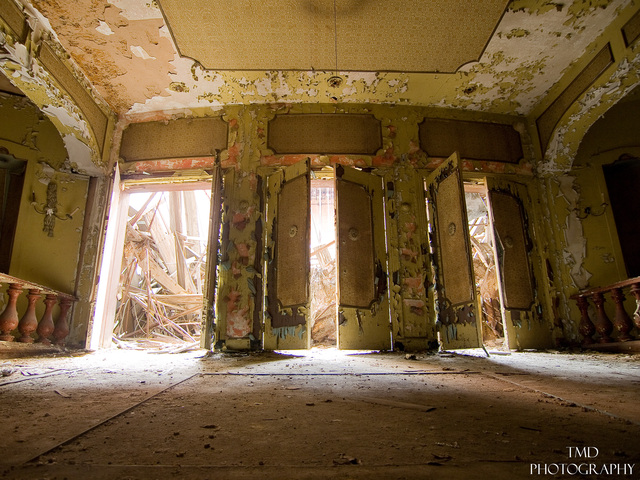 Built in 1880 and opening as the Natatorium on June 17, 1880, it was a bathing house and swimming school. After alterations it became the Howard Auditorium opening April 6, 1891. The name was soon changed to Auditorium and it became an ice skating rink in Spring on 1894. It was remodelled to the plans of architect J.B. McElphatrick and reopened September 30, 1895. In 1896 it was remodelled again to the plans of architectural firm J.B. McElphatrick and a Palm Court was built on the roof garden. The old Auditorium was closed on April 4, 1903 and was demolished.

On the site rose a new Auditorium Theatre which opened on September 12, 1904 with Keith’s Vaudeville and moving pictures. It was designed by architectural firm J.D. Allen & Co. of Philadelphia. It was taken over by the Shubert Bros. in 1909 until 1913. Briefly operated by Poli, it returned to the Shubert’s in 1918. The theatre remained mainly a playhouse, although occasional films were presented.

In the summer of 1940, the Auditorium Theatre was remodelled again, this time to the plans of local architect E. Bernard Evander. It reopened as the Mayfair Theatre on January 31, 1941 with the movie “One Night at Earl Carroll’s staring Ken Murray. By 1960 it had been equipped with 70mm projectors. It was closed in April 1986. Today the Mayfair Theatre is another vacant theatre building in downtown Baltimore City.

In 1998 the roof collapsed. It is in general disrepair, but so far, the building remains standing.

Adjacent, just north of the Mayfair Theatre, a small parking lot marks the spot of the Stanley Theatre, Baltimore’s once largest theatre, until it was razed in the 1960’s.

today the Mayfair is now listed as Baltimore’s Historical Landmark

I saw EXODUS at the Mayfair in 1960 in 70mm. It was one of the worst projected films I have ever seen at any major theatre. Everytime reels were switched you heard a sound like aclap of thunder. The reel changes were rough and you missed some of the dialogue on changeover. The theatre was dirty and in some dis repair. I vowed never to go back there again and I didn’t. I was a projectionist myself at the time at NAS Anacostia in D.C. and I noticed those mistakes.

Tinseltoes do you by any chance have any historical programs or collections from the Auditorium or Mayfair like tickets or interior or exterior pictures of it. And if you do I would love to seeit.

Thanks Chuck1231, I am already familiar with Kilduff’s site, btw he is giving me two Stanley Theatre programs for free and one movie ad from both the Mayfair and Stanley. But I can never seem to get a picture of the Mayfair interior or the Auditorium interior.

Today is the day of silence as we mourn the tragic loss of Peter O'Toole the famous actor who portrayed Lawrence in Lawrence Of Arabia in 1963 along with Alec Guinness and Anthony Quinn. It was on May 28th 1963 that The Maryland Film Premier Of Lawrence Of Arabia made its showing at the Mayfair Theatre on 508 North Howard St,rewired and redecorated for the premier the Mayfair had upgraded features like new tangerine red curtains,new deep red carpeting was laid and new seats were installed. R.I.P Peter O.Toole August 2nd 1932-December 15th 2013.

This is another one I drive past every day shaking my head and asking myself why. I recently saw a picture of Howard Street taken in 1982 that showed every building occupied and a lot of people on the sidewalks doing their Christmas shopping. Those of you who live in or near Baltimore know that Howard Street now has a post-apocalyptic look to it, all thanks to local mismanagement.

Even though the roof is gone and the interior is totally trashed by 15 years of exposure to the elements, the walls and facade of this theater look like they might can still be saved. The later marquee that still hangs above the entrance obscures some of the original detail of the building along with the other “improvements” made to the street level over the years. There has been talk of people resurrecting this theater over the past several years, but nothing ever materialized.

zenith82: The problem with Howard Street can be tied to one person: real-estate mogul “Honolulu” Harry Weinberg. He owned most of the property in downtown, but refused to develop it or even lease it to businesses. The buildings deteriorated. However, the city was afraid to press him, because it was known that he planned to bequeath his vast wealth to many hospitals. Nearly every medical center in Baltimore has a “Harry & Jeanette Weinberg Building.”

After Weinberg’s death, his estate held up the much-ballyhooed Westside development project, because they wanted their own developer instead of the one chosen by the city.

January 31st, 1941 grand opening ad as Mayfair can be found in the photo section.