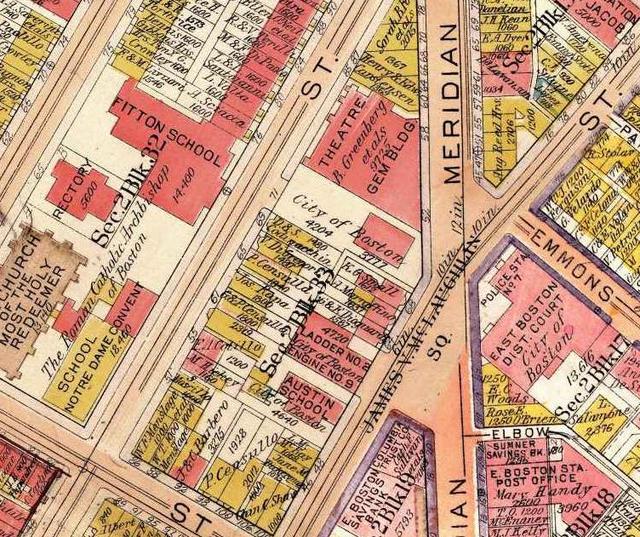 The Gem Theatre was one of East Boston’s neighborhood cinemas. Further information welcomed.

The MGM Theatrre Photograph and Report form for the Gem on Meridian St. in East Boston has an exterior photo dated March 1941. The entrance was at the left end of a large brick 3-story building. There are stores on the ground floor and either apartments or offices on the 2 floors above. The Gem’s entrance is interesting: many theatres of the period had a half-circle arch above the entrance, but the Gem has a pointed Gothic arch and window. Out in front of the arch is a short vertical sign and below that is a small marquee; the name “Gem” is repeated 5 times on this signage. There are at least 2 ddouble doors with poster cases on either side. To the left of the entrance is a brick wall behind which is a courtyard for the building to the left. The Report states that the Gem has been playing MGM films for over 10 years; that it was built about 1910; is in Poor condition; and has 502 orchestra seats and 203 balcony seats; total: 705 seats.

The address for the Gem in East Boston is listed as 52 Meridian St. in a Boston business directory, Issue 85, which I think is 1921; found it on Google Books.

In the street directory section of the 1918 Boston Register and Business Directory, Issue 83, the Gem Theatre is listed at 52 Meridian Street, near Decatur St.

A shame that the property is now just a gas station…

Shot of the entrance: View link

page 22 in the link has the shot

I added a 1922 map of the location to the photo section. The building was originally a Unitarian church going back to the early 1880s. They added the part along Meridian st when the theatre went in.