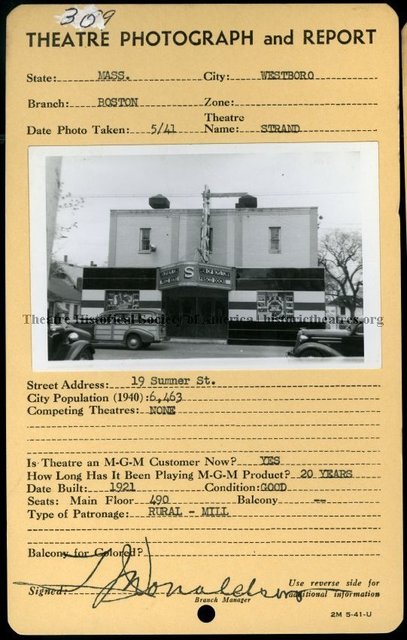 The Strand Theatre was the local movie house in downtown Westborough, a town just east of Worcester. It was at one time run by the Fred Leiberman Proven Pictures circuit of Boston. Further information welcomed.

The MGM Theatre Photograph and Report form for the Strand in Westborough MA has an exterior photo dated May 1941. The Strand was a free-standing building 2 stories high. The facade on the ground floor was decorated with alternating horizontal broad stripes; on the second floor, the stripes were vertical. I assume that they were painted in contrasting colors. There was a small triangular marquee over the center entrance; the marquee had a “S” at its apex, and there was a vertical blade sign above. On each side of the entrance there were very large poster cases. The Report states that the Strand is at 19 Sumner (sic) Street; that it has been a MGM customer for 20 years, that it was built in 1921 and is in Good condition, and has 490 seats. There are no competing theatres in town, and the 1940 population was 6,400. In the 1927 Film Daily Yearbook, the only cinema in Westborough is listed as “Town Hall” with 400 seats and open 4 days per week. The MGM Report photo certainly does not look like a typical Town Hall. In the 1942-43 Motion Picture Almanac, the Strand is listed as part of Fred Leiberman’s circuit.

According to this website, the Strand Condos are on the land that was the site of the Strand Theatre.

Also, if you look at the slideshow, there is a photo showing what looks like it could have been part of the old building. More specifically, it looks like a stone with the words “Strand” engraved on it was saved and laid in the floor at the entrance to the complex. I am not sure is this was from the walk in front of the building, or from the building it self, or neither. Purely speculating.