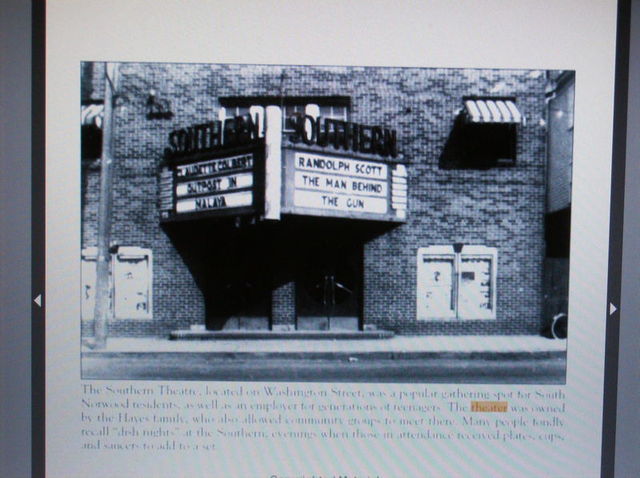 The Southern was, along with the Norwood Theatre and the Guild Theatre, a local cinema in the Boston suburb of Norwood. Further information welcomed.

This looks to be the same theater, as the fake brick matches that in the 1953 photo. Cinema Theater should be an aka.
http://tinyurl.com/d6mthx

ken mc- your photo posted on May 1 above is of the Norwood Theater and not the Southern Th. Look at the color photo which is posted on the Norwood’s page and you can see that it is the same facade.

I grew up in Norwood and the Southern Theater was named such because it was in South Norwood or ‘the flats’ as it was fondly referred to by citizens. So, you were right, Ron. When I went there as a kid in the 1950s, it was getting kind of run down but I recall fondly being jammed in there on Saturdays (all day) watching some wonderful films over and over with every kid in that part of town.

And, yes, Ron, Ken’s pic is of the Norwood Theater (main theater in town square) not the Southern.

Thanks. I posted the 1980 photo on the Norwood page.

Retep- thanks for your interesting comments. Do you know anything about the Guild Theatre in Norwood? It’s not listed here in CT. If you know enough about it to create a Page for it, please follow the instructions in the “Add a Theater” tab on the CT Home page.

Lost- No, I don’t know anything about the Park in E. Walpole. There are many long-gone movie theaters which are not listed (yet!) here in CT.

I was born in 1949 and the Guild Theatre had already closed by the time I was old enough to realize (perhaps 4 or 5 yrs old). There was a chic department store called Parke Snow that was near it and my mother used to shop there, so I recall seeing the old marquee nearby but never got to go inside. It was in the center of the main block on Washington Street in the uptown area back then near Woolworths and all the stores.

The Park Theater was a small deco theater without a balcony (as I recall) that was in a small early strip of stores/shoppes directly across from the Bird Park entrance near the corner of May St (where my Aunt lived) and Washington in East Walpole. I saw virtually most of the 1950s horror and adventure films like ‘7th Voyage of Sinbad’ and ‘20 Million Miles to Earth’ in that place. I tried to sneak in to see ‘Psycho’ in 1960, but they caught me (you had to be 12). It abutted a bakery which later was bought by Peggy Lawton’s who eventually procured and demolished houses and stores to garner more parking and warehouse space during the 60s/70s. They bought my Aunt’s house and tore that down also. There was a malt shoppe with a jukebox and a fountain next to the theater that was a great teenage hangout and a place to go after the movie.

Sorry it took me so long to return to the site (I love it btw), but I had a snag with my password and name that didn’t get resolved until recently.