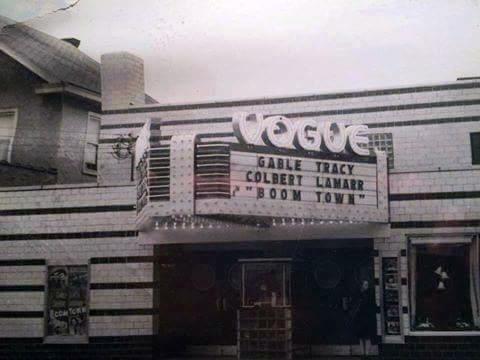 The Vogue Theater was located just to the north of the (still operating) Vogue Cafe, which was established in 1925. Patrons who visited remember it had no balcony, but seemed to think that it had a curtained stage with an admission charge of 10 and 15 cents in the early-1950’s. It closed sometime around 1968 and was torn down afterward.

albert harris was the grandfather of a best friend of mine growing up in wyoming. i didnt know, though, that he was the owner of the theater until after he had it torn down – otherwise i might have called him a few choice names.

miss chase was the manager who gave away prizes every saturday matinee, and one if you said it was your birthday too. when we were young teenagers, she did not allow you to put your arm around your girlfriend, and she called my parents more than once for other serious infractions.

my friend salvaged a framed picture of the vogue circa 1940 – the marquee shows “boom town” with clark gable playing. could have been much later, because they showed stuff long after it first appeared. “the slender thread” was the last film shown – i was there that night. not long after we all played in the rubble.

mrs chase was not the owners wife, btw. albert harris was the owner, and i knew his wife a little. definitely not ms chase. she did however have a sister who helped her behind the popcorn counter, taking tickets, etc. years after it closed i looked her up in the phone book and tried to call ms chase (we called her “miss” i think) but didnt connect.

My father was booking agent for the Vogue theater when it closed. He told me that the supermarket behind the theater wanted the theater to expand their parking. Mrs. Chase said to my father that she got tired of them asking and named what she thought was a ridiculous price, and they met it her so she sold it. I never heard the name Harris related to the Vogue.

Okay… First of all, the Vogue Theater was not next door to the Vogue Cafe. The Vogue Cafe was, and still is, on the SW corner of Vine and Mary Streets. The theater was north of there, about halfway to West Mills Avenue. In the photo above, the theater would have been to the extreme right of the photo, next to that gray apartment house. The cafe is at the extreme left, just off the photo. There were several buildings in between them. The building immediately next the the Theater was an old storefront in use only as storage for Barthel’s Hardware, which was across the street on the SE corner of Vine and Hillsdale.

As to the stage curtains; yes, they were still there in the 60s and I remember paying a quarter to get into the Saturday matinee. Correct, no balcony.

I am looking for an actual photo of the old theater. If anyone has one, how about sending its image to me at . Thanks!

I remember The Vogue, Mrs. Chase, and the Saturday prize giveaways (pulled from ticket stub numbers) very well, having lived on Oregon Trail in Wyoming in the early to mid 1960’s. My friends an I would ride our bikes down either Reilly or Fleming Roads, then along Springfield Pike (Vine St.) to the Saturday morning movies. Admission was 35 cents if you were under 12 years old, and 50 cents if you were 12 or over. My 50 cents a week allowance back then bought me admission, a ten cent bag of popcorn and a nickel candy bar!

Chuck – I emailed you a pic.

From 1955 to 1965 my parents lived on Fleming Road in Springfield township, so I often got dropped off to see movies at the Vogue. I never knew Mrs. Chase by name, but I remember her. One time I got into trouble with the ticket taker by accidentally knocking over the box which held the ticket stubs for the big Saturday drawing. As a boy I went to a few of big Disney releases at downtown theaters, but the Vogue was where I did most of my movie-viewing. Alas, I never had a girl friend to take along. For some reason, I remember the candy display counter, with the dots and black crows. (I don’t think the latter sold very well, but I liked licorice, & sometimes the black crows could be pretty well hardened.) I am not sure which cost more—the movies or the candy.

Thank you, minimomoser. BTW do we know each other? How about you Wyomingkid? I tell my grandkids about the Vogue all the time, and how cool it was to have a little movie theater right in the neighborhood.