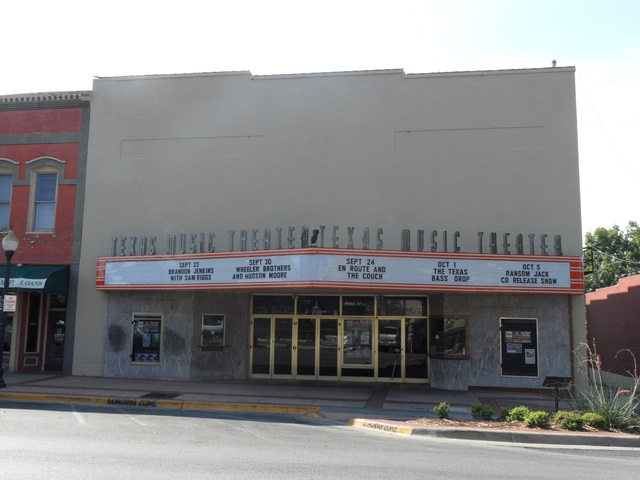 With a very unusual name, the Palatium Theatre was housed in a similarly unique building in San Marcos. The two top thirds above the white, hot pink trimmed marquee was off-white with three pink vertical circular attachments on each side that possibly had back lighting. ‘Palatium’ was spelt out horizontally in small black letter above a pink column that was accented with neon. The marquee sheltered the entrance and outside attached ticket booth. The lower third of the building , under the marquee, was faced in white streaked, grey marble. Movie poster frames were on each end of the building.

By the late-1950’s, it had been renamed Holiday Theatre, and was the ‘first-run cinema in San Marcus. It continued to operate into the 1970’s. After closing, the former Holiday Theater building became home to Gordo’s Grill, in March 2009 it was converted into a concert venue.

This is the same building that is listed as the Palatium Theatre in San Marcos, TX

Nice photos of the Holiday Theatre/Grill.

As others have noted, this theater is the same as the Palatium Theater which has a separate listing here on CT. The theater is about to reopen as the Texas Music Theater; the new official website is http://texasmusictheatersanmarcos.com/.

According to the information on that site under the Venue tab, the theater opened as the Plaza in 1952. It was in 1958 that it was remodeled as a twin theater and renamed the Holiday. It became Gordo’s after it its life as a cinema.

The theater should now be listed as Texas Music Theater. The status of the theater should be open; Function: Live performances, with AKAs of Plaza, Holiday, and Palatium. There is an article about its reopening in its new role here: View link.

See my photographs of the building as the Texas Music Theater, taken in September 2011.

I was a projectionist at the Holiday mid to late 60’s. It did not become a twin until the early 70’s. Owned by Zimmerman Theaters, an independent. Earlier was named the Texas Theater.