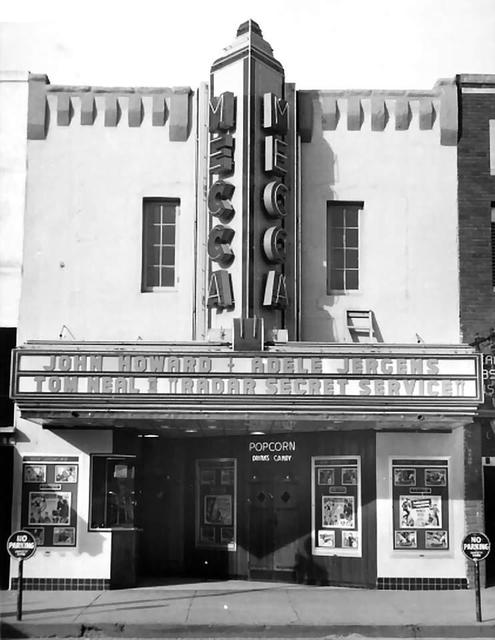 STillwater’s Mecca Theatre exterior had a wonderful “Coney Island” flavor about it and surely was very colorful. Since the Mecca often showed B-western movies the auditorium carried a western theme with faux kerosene lantern lighting fixtures.
Excellent 1936 exterior & 1938 interior photos can be seen by typing in word “mecca” …
View link

The 1914-1915 American Motion Picture Directory lists 716 Main Street as the location of the Alamo Theatre. A brochure with a walking tour of downtown Stillwater has this brief history of the Mecca Theatre, but doesn’t mention the Alamo:

“716 South Main was the location of another downtown movie theatre. It began as the Garden Theatre in 1918, and then changed to the Abbott Theatre in 1921. It was the Mecca from 1926-1954. While other theatres showed ‘class a’ movies, the Mecca was known for showing mysteries, science fiction, and westerns, and was popular with kids on Saturday afternoon.”

It’s possible that the Alamo was simply overlooked by the authors of the brochure, or it may be that the earlier theater’s building was replaced by a new structure in 1918. I’ve been unable to find confirmation of either surmise.