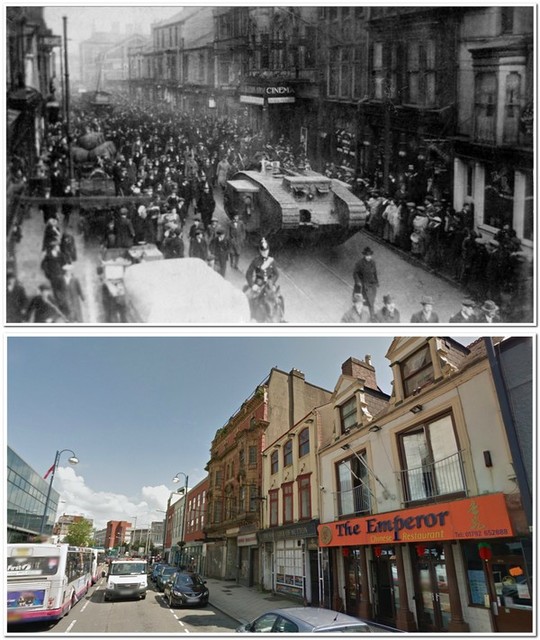 A very impressive high fronted building at the top end of Swansea High Street just seconds away from the main line station. The Elysium Cinema opened on 11th April 1914 in a building which was part used as the Dock Workers Hall. It was designed by the architectural firm Ward & Ward of the Strand, London. It closed as a cinema in 1960 and went over to use as a bingo hall, which had closed by 1994. It has been boarded up for many years now.

This cinema/theatre is the one Swansea building of entertainment that never seems to get mentioned or anyone knows much about. Any info would be of great interest.

OH MY GOD!
Those are just amazing pictures. I’ve wondered for the best part of 30 years what the inside of this building was like. I stood across from it today thinking why it hadn’t been demolished long, long ago. The news is now devastating as Swansea starts to clean up its act but at the price of loosing these once fabulous buildings!
Thanks a million for the pictures.
One now has to be afraid for the future of The Castle Cinema and the stunning Albert Hall.

On the weekend, Feb 13/14th 2009, the pavement canopy bearing the name ‘Elysium’ (seen in the pics above) partly collapsed onto the pavement hitting a passerby and putting them in hospital.
Within hours the whole canopy was removed and the entire pavement area of the building blocked of to pedestrians.
The latest news I could find on the Monday, Feb 16th, was that Swansea City Council have now placed the building on immediate demolition status and work, Im told, will be completed before the summer.
Sad news for a very impressive building left to rot alone for the last 30 years

The quickly erected barriers after the incident described above.

As a teenager living in Pontardawe in the early 1950s, we would sometimes go into Swansea on a Saturday to watch a film that was more up to date than those offered by the local halls. My parents always refused to consider the Elysium, claiming it was a fleapit unsuitable for children, so normally we ended up in the cheap seats at the Albert Hall.
Later, I did a few sessions at the Elysium as a bingo checker circa 1962-1963. It was a bit of a mess then – only the stalls area being utilised. The original cinema seating was still in use. Business was good with the blue rinse brigade filling the place every night. At that time the Bingo desks, suspended ceilings and automated bingo equipment had yet to arrive. Sadly I never gained access to the balcony or the box. The hall possessed poor acoustics which meant that checkers had to shout out very loudly when confirming a line or house with the caller.
To my mind, the Elysium was amongst the most unattractively designed and decorated houses that I ever worked in. It had nothing to recommend it even as a Bingo hall. Most of the little valley Workmen’s Halls were often of a better design and maintained in a superior condition.Therefore I’m amazed to learn that the building is still extant. I was always sad to see a hall close and later be demolished. However, in the case of the Elysium demolition years ago would have been a kind act.

I’ve looked closely at the Flickr.com photograph of the derelict projection equipment at the Elysium. Although they are not easy to see, to my way of thinking the heads look as if they are Kalee 12s. My reason for this line of thought is that only the Kalee 12s were designed with a cover over the head driver wheels and belting. Kalee 8, 10 and 11 machines had open belts and wheels.

The arc looks like an old Regal Mk 1 dating from the pre war era. In the 1950s and 60s there were dozens of these arcs being used in the South Wales Valley Halls. The pattern of events being that the Regals were originally supplied with Kalee 8s and then retained when a hall upgraded to Cinemascope and fitted new Kalee 12 heads.

The front of the head is also interesting in that it displays a standard flat screen lens holder but not the required extension bar for holding a second Anamorphic lens. Without an Anamorphic lens scope could not be shown.I am therefore posing the question – was the Elysium equiped for Cinemascope?

CORRECTION
After posting the above in the early hours of this morning, I’ve later today blown the picture up and examined it more closely. The rusty vertical bar to the left of the head is probably the extension bar that held the Anamorphic lens. I was always accustomed to these bars being shiny chrome plated objects.I’ve not been in a box since 1974 hence my confusion as I rely purely on my memory. This bar is rusty. Therefore the answer to my question is probably “Yes” – the Elysium was more than likely equipped for Cinemascope.

The entire frontage is now covered up.
Whats going on behind?
Is this the end of this Swansea picture house?

I am 28 now but I remember having dance lessons in this building I was only 2 or 3. I’m gutted knowone is doing anything to this building to bring it back to life, so it’s in a useable condition. I based my business plan at ty coch college when I did access to business about a year and a half ago.