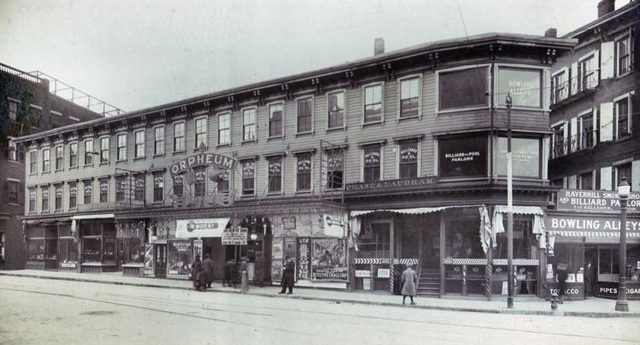 Located in Haverhill to the north of Boston. The Gem Theatre was opened prior to 1907. In that year it was purchased by Louis B. Mayer and it reopened on November 28, 1907 as the Orpheum Theatre. A year later it was refurbished and reopened as the New Orpheum Theatre on September 3, 1908.

The Lafayette Theatre in Haverhill was included in the MGM Theatre Photograph and Report project. There is an exterior photo dated April 1941. The theatre entrance was in a long rectangular 3-story building which looks like a typical New England mill/factory. It has wood clapboard siding and on the 2nd and 3rd floor are long rows of windows. The theatre entrance was in the middle and was very wide with a rectangular marquee above. The Report states that the theatre was on Merrimac St., but someone crossed that out and wrote in “7-9 Essex St.” The Report states that the theatre has been showing MGM films for over 10 years; and that it has 600 seats.

According to a book about the reign of Louis Mayer of MGM this theater (The Lafayette) started as a burlesque theater called The Gem. This was Mayer’s first movie and vaudeville house which he bought in 1907, re-nameing it The Orpheum. After a through cleaning this venue opening Nov.28,1907 to excellent business and allowed Mayer to refurbish again in Sept.3,1908 calling it now The New Orpheum. From there he moved on to more adventures. The Lafayette was closed by 1954, a picture of Mayer standing in front of it looking rather forlorned about its closed appearance in 1954 is rather sad. As noted above it seated 600.

I have seen the 2 photos from the book mentioned above by Hank Sykes; one of the Lafayette taken in April 1954, and the other taken in 1925 of the theatre when it was the Orpheum. Both photos definitely are of the same building as the 1941 picture in the MGM Report. This theatre was named Gem/ Orpheum/ Lafayette.

The Lafayette is listed in the 1927 Film Dily Yearbook as having 600 seats, open daily.

My Grandmother was a “Vaudeville Act” @ the Lafayette Theater in Haverhill, MA during the 1920’s. Act known as “John and Mathilda” (John (or Daniel) and Maude Crane, real names. Any info available, ? flyers, photos would be appreciated. Reply to: