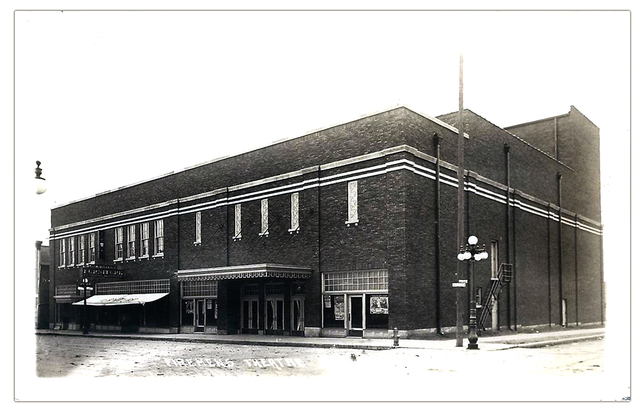 A small theatre that had a couple of columns that were hard to see around. A victim of fire.

Opening date was 1917, according to the New Hampton Tribune.

The Firemens Theatre was purchased by Peterson Theatres of Waverly Iowa in 1974 from Ray Klenski and Ray Huffman. For a small town theatre it was huge in size. In its early days it was used as a vaudeville theatre complete with an orchestra pit and dressing rooms under the stage. If you look at Lost Memories photo of the theatre you will notice that there was a scene drop at the rear of the building that was used in the vaudeville days. It also had cat walks for the stage hands. The Firemens was closed in the mid 80’s and sold to a local investor who completely renovated it to become a live performance theatre once again. One live performer was Jerry Reed. The Firemens was a victim of arson in the late 1980’s of which nobody was ever convicted.

Wonder if “TOWERING INFERNO” played there?

From New Hampton Iowa a photo postcard image of the Firemen’s Theatre.