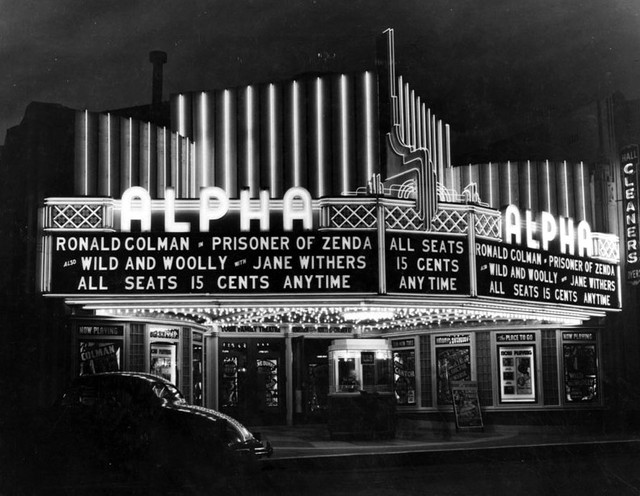 The Maybell Theatre was opened in 1922 by the L. Lou Bard chain Far West Theatres Inc. It was designed by architect Julian T. Zeller, It was remodeled in 1937 to the plans of architect S. Charles Lee and renamed Alpha Theatre. This former Fox movie house has been used as a banquet hall since closing as a theatre.

The L.A. County Assessor’s office gives 1922 as the original construction date for this building. With the other evidence in comments above, that should confirm that this theater was the Maybell, opened in 1922, and remodeled by S. Charles Lee in 1937.

The re-opening of the remodeled Maybell Theatre took place early in 1938. Here’s something from Boxoffice Magazine, February 5, 1938: “With the opening last week of Frank Valuskus' new Bell Theatre in Bell, Fox West Coast is rushing work on its new Bell house, now almost completed. Valuskus, operating at ten cents, will have two FWC houses as competition, the circuit’s Alcazar also coming in that zone.”

(Note: The correct spelling of the name of the owner of the Bell Theatre was Valuskis.)

UPDATE: The theater has been sold. A public notice of ownership application has been posted outside. The new owner plans to turn the theater into a Family Mexican Restaurant. The previous owners renovated and preserved the Art Deco interior. No word on whether the new owners will reatin the architectural significance of the building.

I note that S. Charles Lee has not been added as the architect. Is that because he may have only done the remodel in 1938?

The remodeling was quite extensive, so Lee should be credited. Also the aka Maybell Theatre should be added.

Thanks KenMC for the pictures.

This theater for which the May 21, 1921, issue of Building & Engineering News said plans were being prepared was probably the Maybell Theatre, but it turned out that the original architect didn’t design the house after all:

“One and two-story brick and terra cotta theatre, store and office bldg. Owner — Dr. T. G. De Vaugh and J. V. De Vaugh. Architect — J. T. Payne. 426 Western Mutual Life Bldg. Los Angeles.”The item got the names of the clients wrong (it was supposed to be T. G. De Vaughn and J. V. Spaugh) according to the documents generated by a court case that ensued. De Vaughn and Spaugh found that Payne was not a licensed architect, and so they had a Mr. Zeller prepare new plans for their theater and supervise its construction, much to the displeasure of Payne, who subsequently sued.

The upshot is that the Maybell Theatre as built was designed by architect Julian T. Zeller, who a few years later also designed the Alcazar (aka Liberty) Theatre a couple of blocks east.