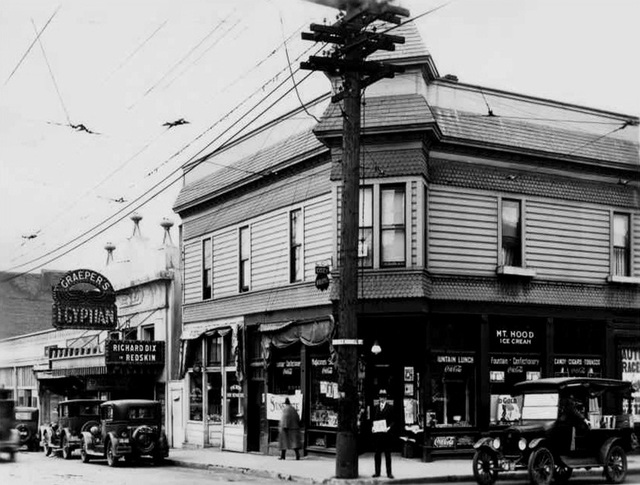 Um… the building still exists. I can send in a picture in a couple of weeks. This is the 4th site I’ve seen that says the building is gone. Nope.. it’s still there ^.^

The building still exists and is the New Song Community Church.

The Google Maps picture for the address (SW Corner of MLK Blvd. and Russell) shows the original theater entrance with extensive renovation, but the building is still there.

The Google Maps link above is about a mile off then.

Is THIS the place?

Silicon Sam – that’s it. The church’s main entrance is on the north side of the building, on Russell.

The year after the Portland Egyptian opened, a very similar Egyptian Theatre opened in Seattle. According to the text of this advertisement for Heywood Wakefield seats in the March 6, 1926, issue of Motion Picture News, the Seattle Egyptian was also designed by E. A. Miller.

Architecturally, the Egyptian Theater set new standards for concrete construction in 1924 and was constructed in record time. The auditorium is all concrete, including the ceiling, which was an engineering wonder for the time.

Please contact me, Steve Graeper at for more information.

The December 6, 1924 issue of Exhibitors Trade Review has this brief article about the opening of the Egyptian Theatre:

“W. E. Graeper’s new Egyptian theatre at Union Avenue and Russell, Portland, Ore., was opened to the public on September 27. It is a beautiful house, Egyptian to the smallest detail, and beautiful in the extreme. There were exhibitors and film men present from all over the Northwest, to congratulate Mr. Graeper. Although the house is in a suburban district, it seats 1,200 people and no expense was spared to make it the finest house this side of Los Angeles. Mr. Graeper arranged an attractive prologue for ‘Wanderers of the Wasteland’, his opening attraction. A short program, including an address by Alayor Baker, a soprano solo and a welcome by the management, were given. Following the public showings a trade screening of ‘Barbara Frietchie’ was given for the film men present. Complete contracts for carpets, drapes, furnishings, lighting effects, and Heywood- Wakefield opera chairs were handled by B. F. Shearer, Inc., of Seattle. Mr. Graeper is a Shriner, and his temple honored him during the evening performance by marching to the house in full regalia. The Egyptian is one of the group known as the Multnomah Theatres, consisting of: the Alhambra, Bob White, Gay, Multnomah, Tivoli and Graeper’s Egyptian.”