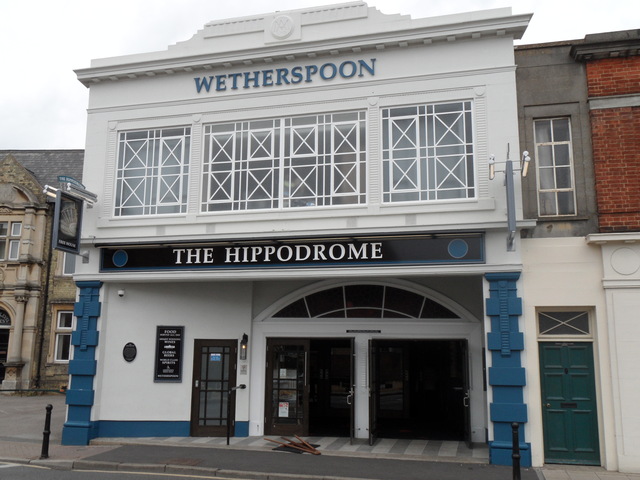 The Hippodrome Cinema opened in 1928 designed for the Bancroft family by Messrs F.B. Ward & C.E.A. Woolnough. It had 903 seats in the stalls and circle layout. The circle had an unusual extension towards the screen with three moulded box front fronts, but there does not seem to have been box partitions around them. The proscenium arch was 32 feet wide and there was a stage 24 feet deep with five dressing rooms provided. The company name for this and the nearby Regent Cinema (also with a stage, but now demolished) was March Amusements and the initials MA Ltd can be seen on a cartouche at the top of the facade on Dartford Road. The other street side in Darthill Road is also of interest with the stage doors, ornate windows and decorated exit doors.

The Hippodrome Cinema was taken over by the Star Cinemas group in the 1960’s and was closed in favour of bingo in 1970. A couple of attempts to re-introduce films failed until 2001 when the circle was adapted with new seats in every other row (giving fantastic legroom), new projectors, Dolby sound and a new screen in the original proscenium were all installed. The Hippodrome Cinema recently screened films each Monday and Tuesday, using 108 seats in the circle only, whilst bingo continued the other evenings of the week using the stalls (tables and chairs) and circle seats. New owners took over in early-2009, and film use ended, with bingo continuing, plus a planned use for stage productions envisaged. However, bingo use ended, and in July 2010, the building had been purchased by the J.D. Wetherspoon chain and converted into one of their pubs, which opened as the Hippodrome on 22nd March 2011.

There is a refreshment room with a separate entrance from the front or doors from the circle foyer. The Hippodrome Cinema has seen little material alteration in nearly 80 years of use and is an attractive and comfortable survivor.

PUB chain Wetherspoons has unveiled their ambitious plans for the conversion of the Hippodrome Bingo Club in March.
Wetherspoons have now applied to Fenland District Council for change of use and have detailed the changes they want to make.
A company spokesman said the principal changes include a new front entrance from Dartford Road to include period styled glazed double doors. However the company says the semi circular glazed panel and surrounding art deco feature will remain but will be repaired and repainted where necessary.
On the ground floor the existing sloping floor will be levelled to provide a large open plan customer area.
â€œThe bar area will be designed to reflect the aesthetics of the existing architectural internal characteristics of the building,â€ said the spokesman.
Wetherspoons also plan to remove the staircase enclosure off Darthill Road and â€œin doing this it forms a large area where natural daylight can come through. It also allows the company to form a summer opening faÃ§ade with side opening sliding doors.â€
Existing asbestos roof sheets will be removed and replaced with a slate profiled roof system â€œto blend in with the surrounding roof scapeâ€.
Wetherspons says the existing building is not listed and is not within a conservation area although their proposals will bring about a careful refurbishment.