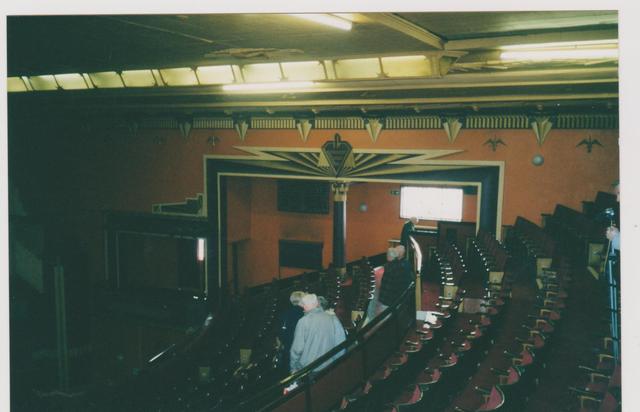 The Empire Theatre is an Art Deco gem of a building, barely altered since it opened on 22nd November 1932.

The artificial stone exterior contains only a nod towards the Art Deco style with its geometrical glazing bars to the windows and the shaped pinnacle at the centre of the three bays above the tall bay window.

However as soon as you entre the foyer the style hits you. Beautifully inlaid doors with a five sided arch surround, ornate angular plasterwork, and the stair balustrade to the circle remain as built and lovingly maintained.

The auditorium is amazing with the richly moulded reeded and prismatic ornamentation, the angular boxes at circle level, the impressive side circle openings, the ceiling decoration with the twin lighting troughs, the Aztec motifs on the balcony front all remain in glorious high Art Deco style.

It was designed by Messrs F.B. Ward & C.E.A. Woolnough for Harry Bancroft who also owned the Hippodrome (demolished c. 1982) in the town. Films ceased around 1970/1971 and stage shows around 2004, the building is now used solely for bingo with tables and chairs replacing the stalls seating. However the Empire is in such good condition that, if it were ever needed, it could return to live or film use within just a few days.

Like the March Hippodrome, it is now owned by Norman Jacobs who has a genuine affection for the building and with his long serving staff keep it in tip-top condition. The projectors are still in place and are serviced, all light fittings are original and are also in full working order. The stage and dressing rooms are also practically ready for use. In a side room is the ‘Blackstone’ oil fired generator which used to power both the cinema and a nearby hospital!

A real cinema treasure! The Empire Theatre is a Grade II* Listed building

I believe that movies stopped screening at the Theatre closer to 1970/71. My father Harry Brett was Manager of the Theatre until we emigrated to Australia at that time. I remember as a child being seated in the back row while my father managed the Theatre and my mother worked in the ticket office/box. When the movie, “The Battle of Britain” was screening, he set up a display at the front counter with die cast models of the British and German plains hanging by fishing line as if in the air doing battle. Looking at the photos posted, my memory is taken back to those years and I am happy to see that we preserve some of our history as with this building.