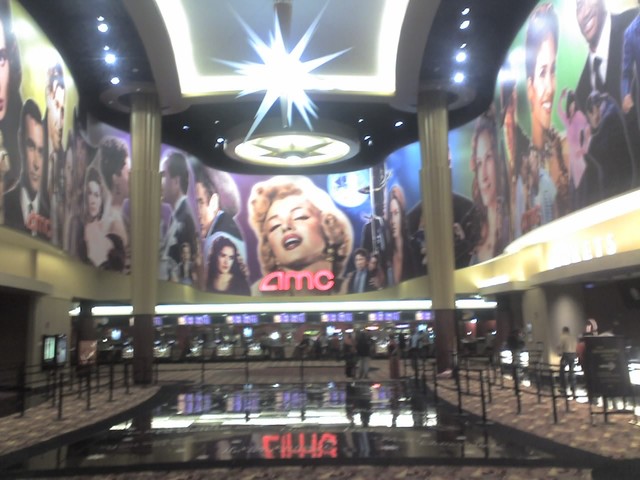 One of the best movie theater murals i’ve seen inside a theater. Reminds me of the Loews theater in nj.

@Moviebuff82. Thats because IT IS A LOEWS. Loews Cineplex designed and built Garden state 16, thats why its got those huge murals, just like Jersey Gardens. DID YOU NOTICE THE GIANT LOEWS CINEPLEX LOGOS ( 3 crisscrossing beams of spotlights) all over the outside.? Unfortunately AMC took over Loews Cineplex just before it opened, and sent the loews lettering back and replaced it with “AMC”. It really annoyed me when AMC ’s PR spin machine lied about Garden state 16,Aviation 12,Rockaway 16 as “ Examples of AMC’s state of the art theatre design” with no credit to Loews,who REALLY DESIGNED AND BUILT IT. AMC simply IMPOSED their name.

I wish REGAL had aquired Loews, IT would be Regal Loews Garden State 16, and the Loews Cineplex Name would be proudly displayed along with REGAL,UNITED ARTISTS,LOEWS CINEPLEX,EDWARDS THEATRES. 42nd street E walk might still be a “REGAL LOEWS”….oh well.