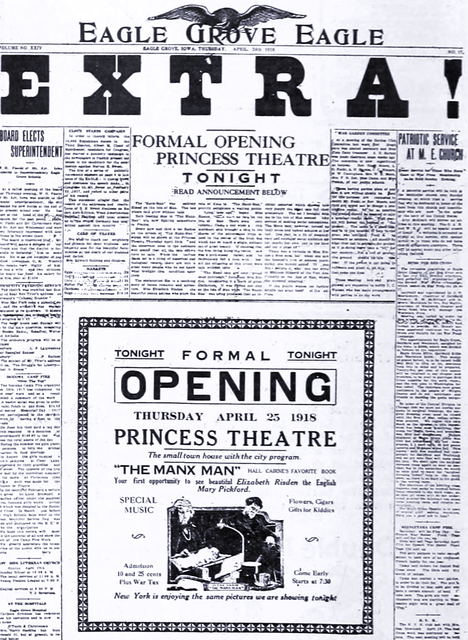 The Princess Theatre was opened in the early-1910’s. It was refurbished in April 1918. By the early-1940’s it was operated by Central States Theatres Corp. Purchased in the early-1980’s by Peterson Theatres of Waverly, Iowa. It was remodeled and automated, re-seated and roofed before being re-opened. The project just didn’t work and the Princess Theatre was closed in about 1983-1984. I went through Eagle Grove in 2002 and it was gone.

In the useless information department, the Princess took out a small business loan from Wells Fargo on 8/25/78. The two page list is interesting in one aspect as some of the theaters have not yet found their way to CT:
http://tinyurl.com/2hdtjn

I added one. I saved the list for future reference.

I have quite a few memories of the old Princess and I’d like to share them with you. I hope I don’t prattle on too long…

First off, I spent 14 years or so growing up in Eagle Grove, from 1963 to about 1978. I cannot tally the number of movies I saw at the old Princess from about ‘67 to '78. The movies and the swimming pool were about the only things to enjoy in town for a kid. But the memories from that old theatre (with the rip in the screen and suspect ceiling) will never leave me.

During the holidays Mr. Fromm, the owner, would let the kids in for a free showing of a movie. Never a first run, I remember seeing Elvis in “Kid Galahad” once, and then “Godzilla vs. the Smog Monster” in the early 70’s. Perfect yuletide fare, no?

The lobby was polished black faux marble with Warner Bros. characters etched above the snack bar. (correct me if I’m wrong here). I recall Bugs and Daffy and Road Runner best. The old soda machine stood in the corner and you could whip the silver dial around to get different flavors in mid-pour. I always did my own “Cherry Coke” thing. Soda was dispensed in a paper cup for a dime. A box of Red Hots in the pink, plastic window box completed my snack selection and the box made a great whistle too. Once in a while I’d get popcorn but hey, I wasn’t MADE of money.

A step brother, Kevin and a brother of mine, Steve, were projectionists there in the mid 70’s. I visited the projection booth once or twice and was enthralled. I’ll never forget the day my brother called home and asked me to bring up a pack of smokes for him. It was summer, late at night, but I got a pack (he wasn’t supposed to be smoking) from his room, snuck out and raced my bike downtown only to be stopped by a cop in the deserted street and told to go home and put a light on my bike. (I rode up the back alley on the opposite side of Broadway for three blocks then hit the theare.) The booth was all hot and steamy and mysterious… very, very cool.

This led me to becoming a projectioninst in training at the Webster and Corral Drive In theatres in nearby Webster City when my family moved in ‘78. It didn’t last long, but I recall the Webster theatres had the same, old (even for then) simplex projectors with the carbon arc lighting that the Princess had.

Years later I was working in radio in Clarion, Iowa at KRIT-FM and I knew a volunteer fireman there who help put out a fire in the Clarion Theatre, also owned by Mr. Fromm. He got me a lobby card from the Princess in March of 1957. 19 films played at the theatre that month, including “Shake, Rattle and Roll”, “The She Creature” and “The Iron Petticoat” with Bob Hope and Katherine Hepburn. I will try and scan a picture of it but I’m not sure how to post it or link to this site.

If anyone else has great memories of the old Princess, I’d like to read about them here. I also hope the town is successful in its fundraising efforts to get a new theatre in town. If they do, I hope they call it the “Princess” as an homage to the great, old theatre that was, to me at least, a holy shrine of my childhood. I don’t think I ever – as a kid – found a place that I felt more at home than I did sitting in that theatre every Saturday afternoon and many Saturday nights.

Just had a brain flash about some of the movies I saw there as a point of historical reference: “True Grit”, “The Young Americans”, “The House That Dripped Blood”, “The Legend of Hell House”, “The Dunwhich Horror” (I was a huge horror freak as a kid), “The Poseidon Adventure”, “Easy Rider”, (A kid could get into ANYTHING at the old Princess, I was never rejected even once.) “Young Frankensein”, “Let It Be”, “Godzilla vs. Megalon”, “King Kong Escapes” (Kong was another Christmas freebie)… and many, many more. The last movie I saw there was “Grease” on its first run in ‘78 but I had already moved and went back to town with a friend to see the movie. The scariest experience was “The Town That Dreaded Sundown”. Many did me and my friend, Tim have a heck of a walk home THAT summer night in '78. “The Legend of Boggy Creek” was pretty scary too. What about you? What great memories do YOU have?

“Ed S. Morris, manager of the Princess at Eagle Grove, has just finished installing a new canopy which is very attractive and quite an addition to the front of his theatre. He says he certainly would like to take a vacation as he has not been away for 11 years and thinks every person needs a change of scenery.”

Ed must have been serious about needing a vacation. The October 9, 1937, issue of Boxoffice reported that Central States Theatres had recently bought a number of Iowa houses, among them the 520-seat Princess at Eagle Grove. Ed Morris was the seller. He didn’t stay away for long, though, as he was again reported as being the manager of the Princess in the November 25, 1939, issue of Boxoffice. I guess show business was in his blood.

A brief profile of Ed Morris was published as part of the “Twenty year Showmen” feature in Boxoffice of February 24, 1945. It said that he had gone into the exhibition business at Eagle Grove in 1924, and still owned a half interest (with Central States) in the Princess, his first location. It doesn’t say if he built the Princess or bought it, but it’s clear the theater was operating at least as early as 1924.

Incidentally, the 1937 item is the only one that gives Ed Morris’s middle initial as S. The others all give it as E.

Does anybody remember the “ladies lounge” that was directly to the left of the front entrance? Seems to me that I recall it had a seperate entrance, one that opened from the street. I always remember as a kid thinking that this would be a neat way to sneak into the theatre if you were a girl since the only other entrance was into the lobby. Am I having a false memory here or was this true? In the photo from Chuck 1231 you can see the white door, framed by glass block. Any help here?

When we were remodeling the Princess Theatre in the early 80’s I had a guy come into the lobby and started telling stories of the theatre. One was that the old boy that was the projectionist lived in a room off to the side of the booth.He was married but this booth was his life. The manager never had to remind him of showtime but…when the movie did'nt start the manager went up to see what was wrong. Well the old fella was dead sitting in a chair in his little room. I do recall taking all the stuff out of that room

Do know if Mr. Fromm was the one to sell out to the Peterson outfit from Waverly?

Was open in the early 1910s and was refurbished in April 25, 1918 with a full house under the direction of William Stewart.