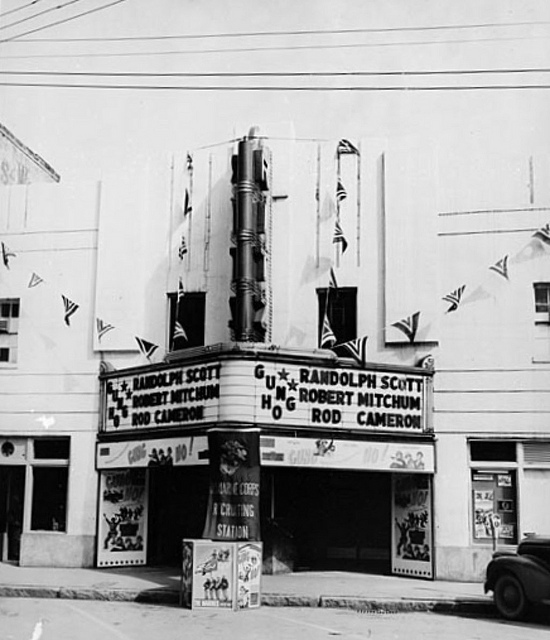 The Ritz Theatre was opened in 1934 and was destroyed by a tornado in 1936. It was rebuilt and reopened in 1940. It was closed around 1961. It was converted into a dance hall named Peppermint Lounge which operated for several years. It then became a movie theatre again, named The Show and screened adult movies.

Some History can be read on the PALACE THEATRE site Athens Ga. I printed several letters on both GAINSVILLE theatres. Enjoy.they date back to the 40’s.

My dad owned this theater and the Royal Theater in the 1950’s and 1960’s. The Ritz never did as well as the Royal and always seemd to be second class behind the Royal. In 1960 or 61, my dad closed the Ritz and my mother took it over. They removed all the theater seats and other “theater” stuff and it was completely redone as a teenage dance club called The Peppermint Lounge. Everything was done in red and white and the ladies bathroom was so cute with peppermint striped chairs. The old concessions area remained a concessions area but instead of candy and popcorn, they sold hamburgers, hot dogs and corn dogs. The Peppermint Lounge lasted only a year or two and my parents sold the Ritz/Peppermint Lounge entirely. I remember in its later years, it was transformed back into a theater and was renamed The Show and showed all x-rated movies (to my mother’s disgust). My parents kept the Royal until sometime in the 1970’s when it was sold.

An article about Gainesville’s movie theaters in the September 26, 2010 issue of the Gainesville Times said that Frank Plaginos, operator of the State and Royal Theatres, opened the Ritz Theatre in 1934. Two years later it was destroyed by a tornado that also damaged the Royal Theatre. The Ritz was rebuilt and reopened, but not until 1940.