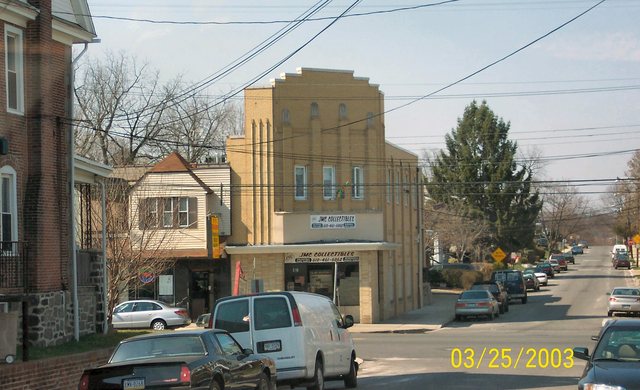 Opened on October 8 1928 with William Haines in “Telling the World”. The Villa Theatre was in business for only about 10 years. In the 1941 & 1943 editions of Film Daily Yearbook, it is listed as (Closed) under Warner Bros. Circuit Management Corp. Designed in an Art Deco style, the building length takes up an entire block.

VILLA THEATRE IS OPENED TO PUBLIC

More than 2000 people crowded the Villa Theatre, Collingdale, at the opening
ceremonies which were held last night. The theatre which cost approximately $500,000,
is the most modern theatre in the string of pleasure houses that the Bonn-Stanley
Theatre Company have in Delaware county.

Many prominent men of the county took part on the opening exercises.
The spacious aisles of the theatre were crowded and every available space of standing room was put to use to accommodate the theatre goers.

The bugle and drum corps of the Murray Stuart Post of the American Legion opened the
program when they, with a troop of Boy Scouts, marched down the center aisle of the
theatre and placed two American flags on the stage.
Charles Straub, organist played the “Star Spangled Banner” while the troops were
marching to the stage. Lee Harvey, manager of the new theatre introduced the speakers of the evening.

W. Howard Kirkpatrick, burgess of Collingdale, made a speech of acceptance,
of the theatre “on behalf of the borough. He also spoke of the beauty architecture and
accommodations of the now pleasure home.

District Attorney William J. MacCarter, Jr. dealt with the modern features of the new theatre and congratulated the borough on their acquisition.

Marcus Benn, who is associated with the Stanley Company, described the theatre from the first day of the starting of the building until the present. He outlined the course of
events during the erection and the features that the new theatre offers the public.

The theatre is constructed in the French modernistic style of the Sixteenth century, the first of its kind. There are three spacious aisles with ample exits. The floors are heavily
carpeted and the walls are decorated with the finest drapery.

The 10 black & white photos are from the Irving Glazer collection.

The Villa Theater opened October 8, 1928 by the Stanley-Benn Theatre Circuit. The $500,000 theatre opened with William Haines in “Telling the World” with a capacity of 1,000