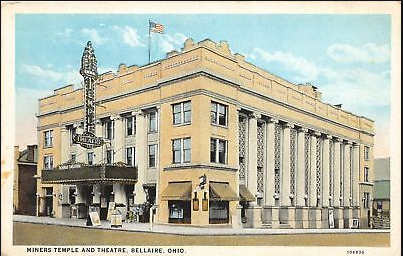 The Temple Theatre had a Wurlitzer type D organ, opus 592.

Although a timeline of Bellaire history at the Bellaire Public Library' web site says that the Miners' Temple was built in 1926, the web page lostmemory linked to earlier, which is also from the library’s web site, says that the building first appeared on Sanborn insurance maps in 1924.

I have found a reference to the Miners' Temple in the January 15, 1923, issue of the trade union publication Cigar Makers' Official Journal, the phrasing of which suggests that the building was already occupied at that time. It’s possible that the Miners' Temple was completed in late 1922, and this might have been too late for it to be included in the 1923 edition of the Sanborn maps.

Uploaded postcard image of the Miner’s Temple and Theatre.