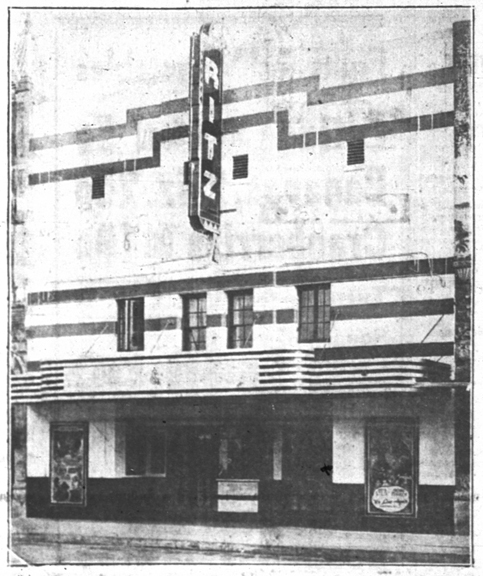 The Ritz Theater was destroyed in a fire on December 3, 1938. It was re-built.

Hot off the web page, here are excerpts from Boxoffice Magazine’s story about the Ritz fire:[quote]“$50,000 Loss to Ritz at Waxahachie After Fire

“DALLAS— Robb and Rowley’s comparatively new Ritz Theatre in Waxahachie is a mass of total ruin after a fire thought to have originated in the balcony. The house had just recently been remodeled. Nothing was saved and the loss is around $50,000.

“Additional loss was a new and late model sound equipment stored in the Ritz building, which equipment was about to be installed in the Empire, ‘B’ house. ‘A’ bookings will be shown in the Empire temporarily, it was said.

“R&R officials have been extremely busy discussing plans for a new theatre, details of which were not made known at this time.”[/quote] I’ve found the Ritz mentioned in Boxoffice as late as 1956. I’m trying to dig up more about the Empire, which was being operated by P.Q. Rockett in 1912, and was sold by him to Robb & Rowley in 1927.

I have a photo of the RITZ I got from the Historical Society here in Waxahachie. The RITZ used to sit on the South East Corner facing the Old Courthouse. It was razed after the fire and now that lot is a parking lot.. The photo I have shows an Old Pontiac Stationwagon, around the early 60’s model, in front of the Theatre. Waxahachie actually had 3 Walk Ins! The DIXIE which became the TEXAS, the RITZ, and the EMPIRE. And, Waxahachie also had a Drive In Theatre! Called “The ELLIS Drive In Theatre”. I have photos of the Marquee, which still stands today in a clump of trees! Seen Here:. View link .. Also, THe Theatre that was located right off of Hwy 77 is now closed. The NEW ShowBiz is right off Hwy 287, as is a Multi-Screen. Seen here:. View link .. Enjoy!!
Randy A. Carlisle
Historical Photographer
Dallas (Waxahachie) Texas

I now have a photo up of what The EMPIRE looks like today. (Jan-2011).. Seen here:.. View link … It was located a few buildings down from where the RITZ once sat. Not clear on this but From what I can gather, The RITZ burned in its early life and then rebuilt.. It was demolished around 1971…….
Randy A. Carlisle
Historical Photographer
Dallas (Waxahachie) Texas

Where the RITZ Theatre once sat is now a parking lot. Sadly, No remains of the Theatre exist.

The Dixie Theatre was located on the north side of the downtown square and was open in 1914. I need more information about it if anyone can help.

The Dixie, Empire, and The Queen Theatre were open in 1917.

This web page has a very detailed history of the theater on the north side of the square. It says that that house was called the Ritz from November 23, 1934, until it was destroyed by a fire on December 3, 1938. It was then rebuilt and reopened as the Texas Theatre.

In the meantime, another theater that was actually under construction on the south side of the square (a conversion of an existing building) at the time of the fire was opened as the Ritz. The second Ritz was on Franklin Street at the southwest corner of College Street, and must have opened in early 1939.

The page also says that both the rebuilt Texas Theatre and the second Ritz Theatre were designed by the Dallas architectural firm of Houston & Smith.

The Ritz in the photo currently displayed above is the first Ritz- the former Dixie Theatre that later became the Texas Theatre. The photo should probably be moved to the Texas Theatre’s photo page.

Robb & Rowley Circuit open the New Ritz June 13, 1939 with “Boy Friend.” It replaced the old Ritz that got decimated in a fire in December of 1938. That theater’s spot would be taken by R&R’s Texas Theatre. The second Ritz Theater’s final listed screening is December 22, 1962 with a double feature of “Mothra” in Tohovision and “Brushfire.” The Waco Junior Chamber of Commerce purchased the former Ritz in November of 1964 to build a parking lot. From December 28-31, 1964 the theater is demolished.