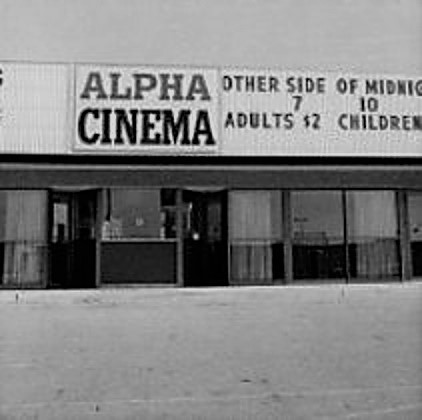 The Jerry Lewis Cinemas chain built this cinema which was due to open on February 14, 1973. However as the Jerry Lewis Chain went out of business at that time it was eventually opened as the Royal Cinemas on April 6, 1973 with “1778” & “Save the Tiger”. Several other operated the theatre until the fall of 1977 when it was taken over by General Cinemas and renamed Alpha Cinema 1 & 2. It was closed on September 29, 1983 after briefly being renamed Cinema Showcase.

It was located behind the Kokomo Mall in a strip mall. The projection booth was downstairs and possible to block the movie in the auditoriums if you were to stand up in the back row.

The box office was when you first went up to the building then go through the doors and had a concession stand. The lobby went to the left but wasn’t very big. If I remember right you had to go straight to enter one auditorium and to the left for the other.

The theatres in Kokomo were good back when General Cinema had the Kokomo Mall and Alpha and United Artist had the Markland Mall. Now that Kokomo is Kerasotes you don’t even get decent quality. Hollywood Studios Theatres now has the Markland Mall which is good quality but it’s been years since Kokomo has had good quilty movies.

There was a gym that went in the old Alpha but that is gone now. It looks like the entire strip is empty but remodeled.

Mr. Hewitt’s comment about the Alpha booth being on the back wall of the auditorium and a person standing up in the back row could block the projector: this is the sign of an early Jerry Lewis theatre – they had “upstairs booth” plans and “downstairs booth” plans and the upstairs plans were developed later. This per company newsletters sent to Lewis exhibitors. I bring up Lewis with Kokomo since I have come across mentions here and there that there was a Lewis theatre in Kokomo but have never confirmed it. The second comment about Alpha being located not in the mall, but in another strip mall behind the mall, gives me the second clue that this may have been the Jerry Lewis theatre, if Kokomo indeed ever had one. The JL theatres were often in oddball locations, behind some other building, and often you could not see it from the street. “Go around to the back” was probably something people were told time and time again whenever they couldn’t find the JL theatre. (I also have a company newsletter that says they had hired a construction company to build all their theatres, and they seem to have had a ready-to-go set of plans that were probably not deviated from very often)

Re the Joe Vogel comment (Markland 5 plex page http://cinematreasures.org/theaters/18563 ) about Cinecom, that seems to be right but according to an item I found in Independent Film Journal of 6-24-71, Cinecom was planning to add a 3rd and 4th screen, of 350 seats each, and they were called “Cinema III and IV” in a large article that mentioned many theatre projects across the country at the time. Perhaps screens #3 and #4 were never done? Were they a split of the first two screens? At any rate, it looks like more investigation needs to be done with the late 60s-early 70s period of Kokomo theatre exhibition. Seems there a few theatres that may be mixed up and need to be sorted out?

The August 18, 1969, issue of Boxoffice referred to the house as the Markland Twin Cinemas I & II, and said they were operated by the Cinecom Theatres Midwest States, Inc. division.

I’ve been unable to find anything about this theater between then and 1991, when the November issue of Boxoffice said that construction had begun to add two screens at the Markland 3 in Kokomo, and that the house would be renamed the Markland 5.

This location was announced as a Jerry Lewis Cinema in 1972 and was pictured as one of several new businesses in the Old Plaza Shopping Center. The forthcoming Jerry Lewis Twin Cinema had its signage in place, film projectors and had advertised its February 14, 1973, Grand Opening in the paper. It was featured in one of the local coupon books. Franchisee Charles Soupley was ready to launch but the Jerry Lewis Chain and its parent, Network Cinema Corp. were already in free-fall toward bankruptcy. Not all elements were likely provided by Network Cinema Corp. (e.g, curtains) as the 1973 franchisees received – at best – spotty delivery.

The operation finally opened at 1916 South Elizabeth Street called the Royal Cinemas owned by a Boston-company of the same name. It launched on April 6, 1973 with “1776” and “Save the Tiger.” It had two 250-seat auditoriums one called the “King” and the other called the “Queen.” According to reports, Hallmark Releasing took on the venue. But CInecom Theaters Circuit next took on the theater but went out of business. Midwest States of Chicago was next to own the venue.

Kerasotes was set to be the next owner but in August of 1976, the theatre was in court – not surprisingly – as it wasn’t clear who owned the projectors, the concession stand, or anything inside. This was critical as back taxes were owed on the building. The theater was relaunched as the Alpa Cinema and appears to have been independently operated from late 1976 until acquired in the Fall of 1977 by General Cinema Corporation (GCC) Circuit.

The GCC Alpha Cinema I & II had a grand re-opening on Friday, October 28, 1977. General Cinema operated the Alpha until September of 1982 likely opting out at a ten-year lease point. The former manager of the Alpha Cinema under General Cinema from 1977 to its closure in September of 1982, Richard Young, took on the cinema independently. Marketed as the locally owned and operated cinema showcase, Young changed the Alpha’s name to the Cinema Showcase from June 23, 1983 until closure on September 1983. The venue closed as the Cinema Showcase on September 29, 1983 with “Trading Places” and “Strange Invaders.”

(The theater should retain its Alpha Cinema as the signage was in place at the theater’s end and always referred to as the Alpha.) Owner Frank Gentry converted it to a nightclub called Gentry’s which featured the band Grand Funk Railroad as one of its first concerts in 1987.