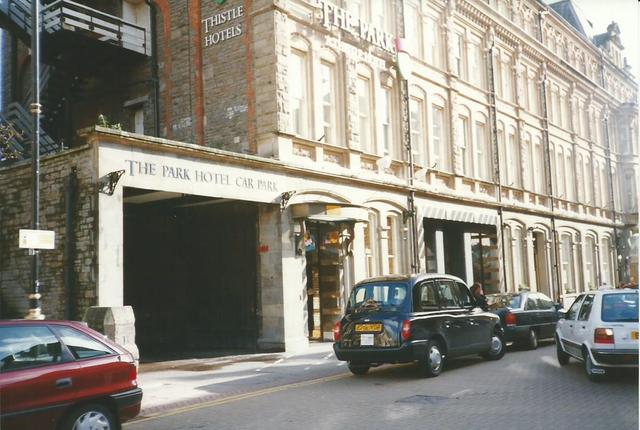 In the 1880’s local businessmen built a large hotel and concert hall on the corner of Park Place, Cardiff.
The hall, which could acommodate 2,000, was used for concerts , meetings, religious services, exhibitions etc, it held a Cinematograph Licence from 1910. Regular use as a cinema did not begin until World War One, and then the hall was still in use for other purposes. It was equipped with a Willis concert organ which had 3Manuals/45stops which acompanied the film programmes, together with an orchestra.

In 1935 the Sir Percy Thomas partnership were employed to redesign the hall and convert it to full-time cinema use. The flat floor was retained but the Victorian balcony was replaced and a new proscenium replaced the concert stage. The Willis organ was re-built in 1936 and the console was placed on a lift, it had a grand opening by organist Edgar Lewis..

In the 1950’s the Park Hall Cinema became the first-run cinema for 20th Century Fox’s CinemaScope features having installed a 37' screen and full stereo sound system.

As it remained independent of the circuits, in later years the Park Hall Cinema struggled to book the best of the new releases and in 1964 took the bold step of rebuilding, internally, for Cinerama.

Opening in late 1964 with the three-projector system and "How the West was Won", the Park Hall Cinerama showed almost all of the early Cinerama productions while other Cinerama Theatres were converting to "Single Lens Cinerama" (70mm).

70mm Cinerama arrived less than a year after opening and survived until production ceased after such epics as "Custer of the West" and "Krakatoa, East of Java".

The Park Hall attempted to carry on, booking everything of a which a 70mm print could be obtained, notably "The Wild Bunch" but had to fill in with almost anything, even black and white old films which looked lost on the huge curved Cinerama screen. It closed in 1971. After laying derelict and then in use as storage, the rear portion of the hall was demolished and the hotel car park was extended onto the site. The remainder of the building had windows introduced and bedrooms were added, with the main entrance foyer becoming commercial use.

The multi-purpose nature of the Park Hall in November 1909 is evidenced by a press ad showing a concert by Paderewski (Friday), “Unique Living Pictures” (Saturday), Religious Services (Sunday).
The South African Living Picture Company is regularly featured, is anything known about this company?

The hotel is currently being reconstructed after fire damage.The former cinema foyer has for some time been used as a bar area.(Sep 2007)

I think I have a very early photo of this cinema. There is a car, buggies, bicycles, trolley, and police man, in the photo. I would love help dating and positively identifying the photo. Wish there was a place to post it.

One of the problems faced by this cinema during it’s Cinerama existence was the high cost of staffing the box.The cinema ran most days from about 2pm until approximately 10.30 pm. The operating system was complex and therefore beyond the skills and abilities of most South Wales jobbing projectionists. These part timers only had experience of the older Kalee, RCA and Westar equipment as used in the minor halls.For this reason the cinema was unable to make use of the many relief projectionists who worked the Cardiff and Vally areas.Thus the Park Hall box carried far more expensive full time,in house, trained staff than any other cinema.

thank you editha, its facinating the information you leave on here,i saw how the west was won at the park hall in the 3 strip cinerama it was amasing, i heard somewher that it needed 3 progectionists to run the films in that format is that correct

I’ve just seen a new TV version of How the West was Won, not the usual TCM version. In this one the joins are very hard to spot and the weird “Bendy” effect when objects move across the join has been largely eliminated, as has the difference in colours between the panels.
Not Cinerama of course but no longer do the technical failures detract from what is now a rather dated film.

Reply to Allan.e
All of the big halls in the city centre (Park Hall, Gaumont, Odeon, ABC, Capitol and Queens) were normally operated by three projectionists at any one time. The staffing being headed by the chief projectionist managing a second and a third. The main task of the very junior third projectionist was rewinding the reels.

On a chief’s day off, command of the box was usually given to the senior second projectionist. None of the big halls used jobbing part time projectionists such as myself.

Many thanks for the above information. I am currently trying to piece together information relating to the hotel as my grandfather was a director there many years ago. My mother was fortunate enough to attend some of the film premiers with my grandparents and met some of the greats such as Cary Grant, Irene Dunne and Ronald Reagan. Sadly, I only have the photographs left now but continue the search.