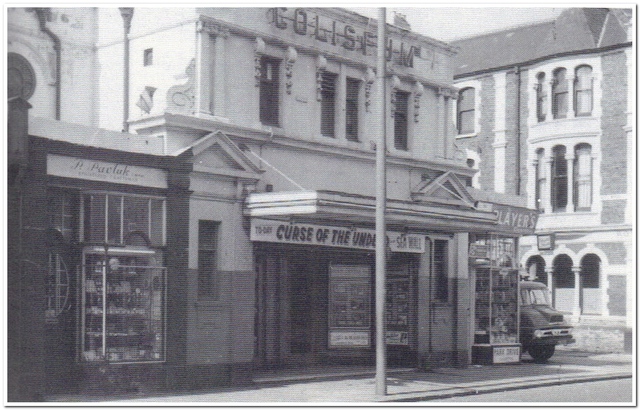 Built 1912 as the Canton Coliseum Cinema and for much of its time second-best to the nearby Canton Cinema. It opened on 6th January 1913 with “Panthers Boy” and “The Indelible Star” and originally had a seating capacity for 900. It had a 25 feet wide proscenium. Around 1930 it was equipped with a RCA sound system and was re-named Coliseum Cinema.

Anecdotal evidence from local residents refers to "seats with holes in","always breaking down" and by the late-1950’s the Coliseum Cinema, part of the local Willis group was a long way from the luxurious venue described when it opened.

Bingo took over in 1961 and for the first time in many years queues were seen outside the "Colla". The success enabled some long-overdue redecoration to be done.

Bingo closed in the late-1980’s and the building was sold for re-development and was demolished. A purpose-built bingo hall was erected on the site for Castle Bingo.

The opening programme, advertised in the press, was “The Panther’s Prey” and “The Indelible Stain”.
It had been planned to open by Christmas 1912 including a colour film in the programme but the opening was delayed.

In the booklet ‘Ninety Years of Cinema in Cardiff’ by Brian Hornsey (published by Fuchiaprint, Stamford) he states….‘The Coliseum became one of the first bingo halls in the Cardiff area in around 1962, and thus films began to be shown part-time. Films ran on until January 1986. Bingo ran into the 1980’s….’

Thanks for the corrections on the opening film titles.

I visited the Coliseum several times in the 1960s specifically to view the projection equipment. I can confirm that the cinema was totally incapable of showing films by 1964 owing to the removal of equipment including arcs and sound heads.

Research in newspapers of the time reveals that the Coliseum started Bingo in the summer of 1961, at first on three/four days a week but within a month had gone over totally to Bingo. Proprietor Rex Willis was interviewed about the huge success of Bingo and also tried introducing it in the previously closed Rialto and at the Globe, though these ventures were abandoned within a few weeks.The Globe survived for over 25 years as a cinema.

The coliseum in the 50s showed the more sex and horror movies though on occasion they were suitable to go with my parents. latterly it got very down at heel. On one visit I touched the row in front with my knee and the entire row fell over. On another occasion mid-film a double door under the centre of the screen opened showing a brilliant light and out of it emerged an old lady in her slippers carrying a teapot with which she exited stage left, returning later and closing the door behind her. Surreal. Never to be forgotten.

I have just come across this. My Dad worked here from 1961 and he can confirm that no films were shown when he was there. He stopped working there in 1978.The opening information is wrong.

He can also confirm that there was not 900 seats but 740. He knew this because he had to count them so he can let people know that it was standing room only.

Thanks to clarkey for this confirmation of details.Perhaps the main page for the Coliseum can now be updated?