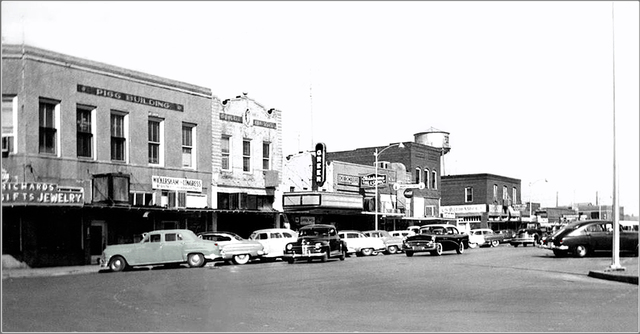 The second Empress Theatre opened on November 7, 1919 with Ruth Roland in “The Tiger’s Trail”. It was closed on June 15, 1929. In 1937 it was purchased by the Griffith Amusement Company, who remodeled it in a Spanish-Art Deco style. It was renamed Greer Theatre on its reopening on November 11, 1937 with Joan Blondell in “Stand-In”. Taken over by an independent operator in the 1950’s it was later closed.

It was taken over by Video Independent Theatres and reopened on September 25, 1955 with James Stewart in “The Naked Spur” & Robert Taylor in “Ride, Vaquero!”. It was closed on January 20, 1957. Exterior and interior photographs reveal the Greer Theater to be a slick little cinema.

From 1948 a photo of western star Tim Holt making an appearance at the Greer and another photo of Tim signing autographs in front of the Greer in Mangum.

Correction to above comment: The second photo of Tim Holt was taken in front of Mangum’s Temple Theater.

This interesting site has vintage photos and a little information regarding the Greer Theatre,
GREER THEATRE, 105 E. Jefferson, Mangum, OK

To view 1938 views of the Greer Theatre, go to below link type in “mangum theatre”,
View link

This is a recent view of the Greer Theatre (photo left), 103 E. Jefferson,
View link

This building was home to the second location of the Empress Theatre which opened November 7, 1919 with Ruth Roland in “The Tiger’s Trail.” The Empress fulfilled a ten-year leasing period and went dark when operator Sam Fringer decided to let the lease lapse and move to the new Masonic Temple Building. The Empress Theatre closed on June 15, 1929 with “The Air Circus” with the equipment moving to the new Temple. The Temple Theatre opened along with the well-placed Temple Soda Shoppe next door on July 1, 1929. The theatre was hurt by a ban placed on Sunday movies by the town in 1929 which was partially released to allow Sunday matinees in 1930.

But Griffith Amusements decided to purchase the venue in October of 1937 and equip it with sound. It became the Greer Theatre named after the county and opening November 11, 1937 with Joan Blondell in “Stand-In.” The Greer went independent and closed in the 1950s due to the impact of television. However, Video Independent Theatres Circuit equipped the Greer with widescreen and a Grand Re-Opening on September 25, 1955 with “Naked Spur” and “Ride Vaquero.” But patronage even with widescreen and Technicolor was poor and the theatre closed January 20, 1957 as it approached its 20-year lease expiration.