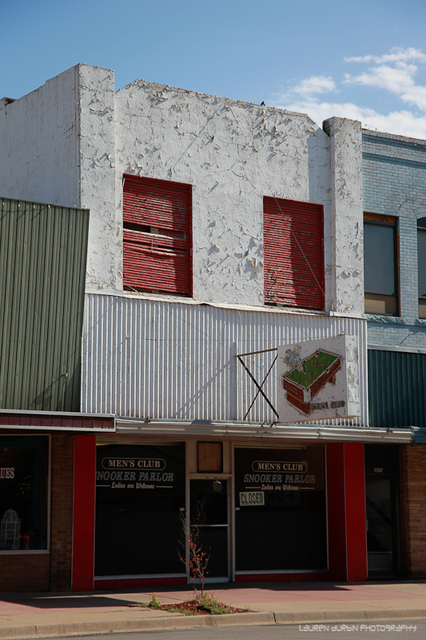 The New Kozy Theatre replaced an earlier Kozy Theatre at a different location, which had burnt down. The New Kozy Theatre was opened on October 5, 1912. In 1914 it was renamed Kozy Theatre. It was closed in 1930 and reopened in 1932 after being equipped for sound. On February 14, 1933 it reopened as the Midwest Theatre. Information available on the Midwest Theater is a 1936 photo showing a tapestry draped, one aisle, “shooting gallery” auditorium. By 1941 it was operated by Griffith Southwestern Theaters Inc, a subsidiary of Griffith Amusement Co. It was closed on June 14, 1949 with John Wayne in “Seven Sinners” last used as a Men’s Club Snooker Parlor.

To view both recent and vintage photos of the former Midwest Theatre see site below;
http://www.roadsideoklahoma.com/node/276

This is a modern view of the former Midwest Theatre (white bldg with red shutters), now a pool hall,
View link

In 1944, the Midwest was one of four Chickasha houses being operated by Griffith Southwest Theatres.The others were the Washita, Rialto, and Ritz, as noted in the April 15 issue of Showmen’s Trade Review.

Although I haven’t been able to pin it down for certain, there is a possibility that Midwest was a new name for an earlier house called variously the Kozy or Cozy, which vanished from the listings some time before the Midwest appeared.

I’m curious if this building has been torn down and a new building rebuilt in its place since 2016? It looks like a brand new building. However, I know that remodeling can have some amazing effects. You will have to google this one out and check it out for yourself.

The Kozy Theatre was opened by W.C. Blackstone. Blackstone had previously operated the Star Theatre beginning with its launch on September 23, 1909. The first Kozy opened in an existing retail location on Third Street in downtown Chickasha opening September 26, 1911. Business for five cent films was brisk. When the Prince Pool Hall burned down on West Chickasha Avenue, Blackstone built a new Kozy Theatre at this address.

The New Kozy Theatre launched Ocotber 5, 1912. One of its first ads stated, “The only theater that is safe from fire. All our wires are in conduits.” Opening films were “Honeybugg’s First Quarrel,” “Foreman’s Cousin,” and “The Price of Art” with music from the Humphries Orchestra. In 1914, J.D. Sugg of the Sugg Theatre acquired the venue and it was simply called, Kozy Theatre dropping “New.” Sugg died in 1925. The theater closed in 1930. Fred P. Hoenscheidt, operator of the Sugg and Rialto, reopened the Kozy with a new sound system in 1932. In 1935, he remodeled the It closed in 1935 the day the Rialto opened with its remodeled, streamlined look. The Kozy Theatre was closed the day that the new-look Rialto closed.

A Midwest Theatre opened on February 14, 1933. It went dark. Then in 1936, Southwestern Theatres Circuit, Inc. relaunched the Midwest Theatre and, though there is some doubt on this, it’s extremely likely that it was here in the former Kozy location. Merging with Griffith Amusement, the Midwest was in the Griffith Southwestern portfolio which also included the Washita, Ritz and Rialto. Griffith closed the Midwest on June 14, 1949 after showings of John Wayne in “Seven Sinners.” That closure turned out to be permanent.

The circuit moved the Midwest’s summer bookings to the new outdoor Chief Drive-In. It promised that the Midwest would return in the Fall. But when the Chief closed for the season late in 1949, the town only had its Washita, Ritz and Rialto theaters to choose from.

The facility was retrofitted for other retail purposes, including a snooker parlor. Because the Kozy Theatre had replaced the burned down Prince Pool Hall, it seemed highly appropriate that the Midwest Theatre was replaced with the Men’s Club’s Snooker Parlor. Bottom line, this can be listed as previously the New Kozy Theatre and the Kozy Theatre with fairly high confidence.