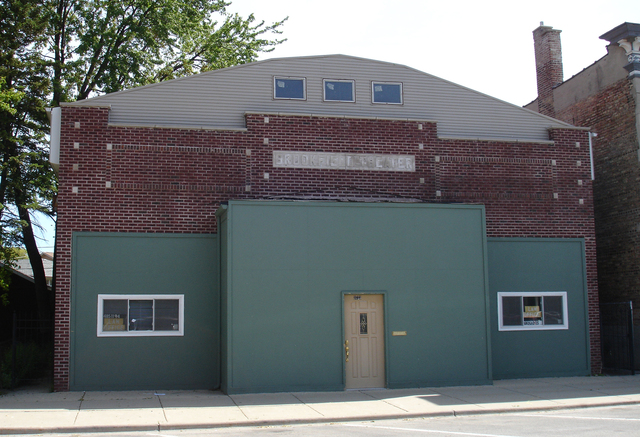 Originally opened in 1915 as the Brookfield Theatre. It was re-named Strand Theatre in 1925.

Closed in 1952, the building has passed through several ownerships and uses, and is currently home to a law office.

When I was growing up, and first became aware of the building (1954, I think) the canopy and marquee was still in place. I was just starting grade school at the time so my memory is a little hazy. As I recall, the marquee was a double sided thing, maybe 10" thick centered above the canopy with regular theatre letters. The only thing I recall ever seeing on it is CHICAGO AIR FILTER COMPANY or something very similar to that. I don’t know when the marquee was and canopy were removed, but I think it was prior to 1962. The building as remodeled has an EXTREMELY cheap and ugly front and a sign simply says “LAW OFFICES”. It has a new, pitched roof and appears to be well maintained, at least on the outside. There is a very good pizza place directly across the street which used to be a “Savings and Loan” when I was growing up. While always a very nice area, this business district is experiencing a minor resurgence with more restaurants and other businesses, so who knows.

My parents bought a house in Brookfield in 1946, when I was one year old. The only movie I saw here was High Noon (hence my handle at this site). The website IMDB.com says High Noon was released on 30 July 1952, so presumably I saw it that summer. If it closed that year it must have been September or later, when kids would have been back in school.

I never heard it called the “Strand”, only “Brookfield Theater”, which are the words visible in the above photo and in the current image at Google street views.